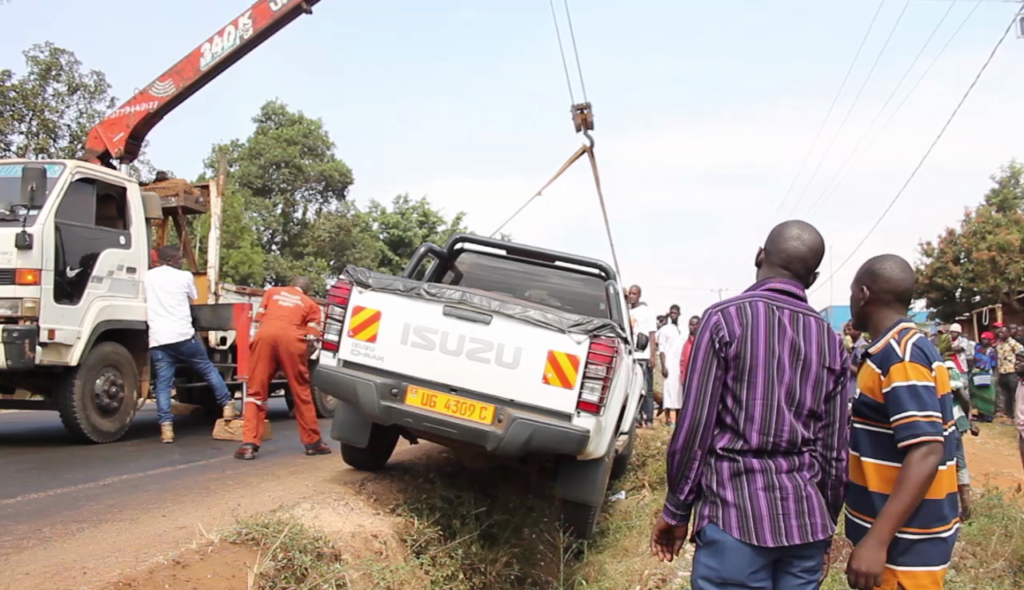 Suspected Cases of high fuel prices demonstrations have been reported in Mukono municipality as the residents of Mukono, especially motorists were shocked to find about 7 kilometers of the Jinja – Kampala road spilled with oil, from Wantoni town to Lwanyonyi.
The oil also paralyzed traffic with some vehicles slipping into the ditches especially those driving cargo trucks and the Mbaale presidential representative’s vehicle was not spared Ashimin Naseke as her vehicle fell into the ditch and rescuers were seen helping.
Fortunately all the occupants in both vehicles survived and rescuers handled the situation by retrieving the RDC’s double cabin car from the ditch.
In the midst of ensuring that the road is smooth there are quarrying companies that have been seen pouring stone dust in the road to prevent more vehicles from slipping.
Residents said it could have been a plot to protest against high prices of commodities and fuel which has hindered people’s economy.
“This act might have been spearheaded by those protesting against the skyrocketing fuel prices and they are wright to do so because the situation is devastating” Residents said.
They have appealed to the government to cut the fuel prices, a thing that has left many low income earners out of business and they are worried that crime will increase.
Mukono RDC Henry Kitambula urged the youths to work and not be used for political purposes in the protests, and said they would investigate the act
“I urge the youth to instead work hard and not be used by politicians for their personal gains and I warn those involved in the act tah the upper hand of government will handle them” Kitambula warned.
By press time police had beefed up security allover Mukono roads moste especially the on petrol stations to prevent more cases of violence in the area.