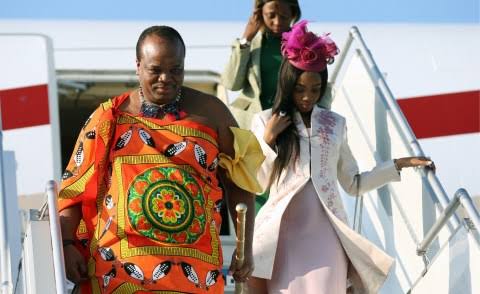 The king of Swaziland, a country found in southern Africa, King Mswati III has fled from his country to seek refuge in safer countries in the morning of 29th June this year.

The situation in eSwatini has become deadly as the National Commissioner has declared a war against protestors that are demanding for democracy. King Mswati The III and his family have reportedly fled eSwatini and are hiding at a suburb in Johannesburg, South Africa.

The people of Swaziland are demonstrating for the reinstatement of multipartism in the country. The one party state was declared in the country by 1973 and has been effective upto date.

Citizens are also fighting for democracy after being denied freedom and blames the king for being dictatorial. The king whose power is hereditary has fled to other countries to seek asylum.

The action by king Mswati III is a show of cowardice because he should have remained in the country to negotiate over the issue and get a long lasting solution.

As the protests continue demanding for the end of the king’s dictatorship, soldiers and police have been deployed and opening fire at protestors whilst arresting others. The protestors are now targeting the king’s houses and businesses and burning many of his shops and trucks.

News coming from eSwatini shows that the runaway king has ordered his police to arrest members of parliament that are supporting democracy. However, the police are refusing to cooperate and the king has begged them to follow his orders. The police, however, have requested the army to make the arrests but the army has no authority to do so.