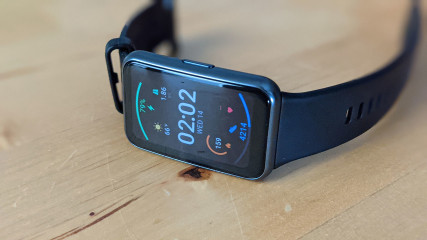 It’s 2020. Depending on where you live in the world, you might be working from home, you might be stuck at home, and local gyms may be closed. One thing is for sure; you’ve been affected in some way by the COVID-19 pandemic, and if you’re like me, you’ve gained some weight.

Being a technology journalist, one of the things that interests me is technology that can help people to get proactive about their health, especially now. That’s why the Huawei Watch Fit caught my eye. I already appreciate Huawei’s LiteOS smartwatches and how good they are with fitness tracking, but this device adds guided workouts.

With guided workouts, the device offers an array of workouts that vary in their degree of difficulty. Most importantly, you don’t need for your gym to be open to do it, and you don’t need any special equipment.

I’ve actually heard the term ‘Apple Watch clone’ to describe this product, and it’s a term that I hate. Personally, I hate calling any product a clone unless it’s exactly that. Apple doesn’t own rectangular smartwatches. This is more rectangular than an Apple Watch too, which is almost square.

It’s also really light at 21g without the strap, although that’s impossible to test since the strap isn’t removable. That’s one of the key differences between this device and the Honor Watch ES, which has interchangeable bands. It’s also pretty thin at under 11mm, and it feels comfortable to wear. It’s not bulky at all.

This is pretty significant. Plenty of watches bill themselves as being made for fitness. The only problem is that they’re so big and bulky that wrist movement is restricted. That’s not an issue here.

Unlike the Huawei Watch GT 2 Pro, there’s no wireless charging here. You’ll find two pins on the back that the charger will magnetically attach to. There’s also a heart rate sensor on the bottom of the device.

You’ll notice that there’s just one button on the side, making operations nice and simple. It services as a home button or it can launch the app drawer. The rest of the UI can be worked through with swipe gestures.

One thing that you won’t find, thankfully, is a speaker. My biggest criticism with the Watch GT 2 Pro is that there’s a voice assistant that you simply can’t shut off. Seriously, it made me want to try and physically damage the speaker because it’s so bad. It’s embarrassing when you’re trying to start a workout and the watch shouts, “WORKOUT STARTED” to everyone around you (not to you, obviously, since you’re wearing headphones). It also goes through a lengthy monolog after you’d walked or ran for a mile, telling you your pace, your heart rate, and so on.

Luckily, there’s no speaker on this device, so that’s not an issue. I probably shouldn’t be so grateful for the lack of a feature which stops a really annoying feature from happening, because Huawei should just allow you to turn off that annoying voice.

The screen is 1.64 inches, and it’s 456×280, which gives it a 326ppi pixel density. That is what Apple defines as Retina, meaning that there’s no visible pixellation at an average viewing distance. Like most smartwatches, the screen is AMOLED, so you get the kind of true blacks where you can’t really tell where the screen ends and the bezels begin.

The Huawei Watch Fit runs LiteOS, the same that the company has been using since the first Watch GT. One of the key features has been great battery life, with all devices from the GT series promising around 14 days of juice. With the Watch Fit, Huawei is promising up to 10 days, or seven days with heavy use.

I found this to be spot on, because I got around a week and I think I use it heavily enough. I usually track at least one exercise a day, and it uses GPS. On a side note, there’s no GPS in the Honor variant of this device, so that’s another difference. But whether it’s a week or 10 days, that’s a ton of battery life. It’s the kind of battery life where you don’t have to think about it, and that changes the way you use the device.

Huawei Health is great for fitness tracking. For example, sleep tracking actually provides insights into what parts of your sleep are lacking and how you can improve it. It also has an automatic stress monitor and stuff like that. Some other companies charge a premium for features like these.

There are a total of 12 fitness courses, which are color-coded by difficulty. Blue is level one, green is level two, yellow is level three, and red is level four. Level one exercises are mostly stretches like ‘Neck & shoulder relaxation’. The level two workouts are pretty easy too, but if you’re out of shape like I was, they can still leave you sore for a few days. These include a six-minute workout called ‘Exercise at work’, a 14-minute workout called ‘Burn fat fast’, and more. At level three, you can get into ‘Ab ribber’ and ‘Leg workout’. The only level four workout is ‘Advanced chest workout’, and I didn’t make it to that level.

This is something that matters in a meaningful way. We live in a time when many of us have been stuck at home for six months. Personally, gyms nearby have reopened, but the gym at my apartment complex still hasn’t. I’ve been taking walks around the complex, but that’s not enough. The Huawei Watch Fit provides a way to stay healthy without having to leave the house, and without needing special equipment.

That thing about special equipment is important too. I don’t want to shell out hundreds of dollars for a treadmill or an exercise bike when my apartment complex gym could open any day. I don’t want to spend money on a gym membership either. The Watch Fit probably wasn’t designed for a pandemic, but it can make a meaningful improvement in my life under the circumstances.

I do have one big complaint about the software. You need to do a factory reset of the device to pair it with another smartphone, something that’s not necessary with other LiteOS devices that I’ve used. This actually threw a bit of a wrench in my review plans, as I was expecting that to work. When I switched from the Huawei device that I was first testing this with to the Google Pixel 5 that I’m reviewing now, I lost my data.

I almost hate to say this because I love so many smartwatches, particularly the Watch GT 2 Pro, but this might actually be my favorite smartwatch, and the fact that it costs £119.99 makes that even more remarkable. As far as functionality goes, there’s not much that the Watch GT 2 Pro can do that this can’t. It’s more about style.

Now the Watch Fit, on the other hand, has a feature that I absolutely do care about and isn’t on Huawei’s regular smartwatches, and that’s the guided workouts. This feature can really help you to stay healthy in a tough time like the one we’re in.

Just two cons. One is that you can’t swap out the strap, and the other is that you have to reset it in order to pair it with a different phone.

But other than guided workouts, this thing is still awesome. It gets up to 10 days of battery life, something that’s unheard of from anything that’s not made by Huawei. And Huawei Health is really great for fitness tracking.

If you want to pick one up, you can find it on Amazon UK here. There’s a listing on Amazon.com, but it’s currently unavailable.