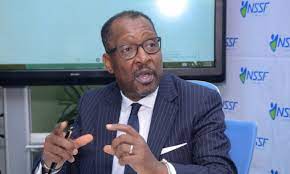 Former now NSSF boss needs more prayers Byarugaba to secure another kisanja as the Managing Director National Social Security Fund (NSSF) should be louder, maybe for whoever is in charge of divine intervention to wake up and act accordingly.

Why? Another person has been appointed in acting capacity as nitty-gritties in his contract extension are being sorted out. Byarugaba, who has been at the NSSF helm for 12 years, qualifies for re-appointment, thanks to the recently amended NSSF Act. His term ended on November 30th and that of his deputy Patrick Ayota.

Curiously, that of his deputy, according to a press statement sent to this publication, has been renewed for a five-year period with effect from 30th November, 2022. But Byarugaba has to wait to learn his fate.

And in his absence and to make sure there is no vacuum, Ayota has been appointed to hold the fort. But where does this leave aka Byaru given that the line ministry of Gender and Social Development bosses have not been showing appetite to make a quick decision on who will be the next boss.

Below is the full statement from Patrick Ocailap on behalf of the NSSF Board’s chairman.

“In accordance with Sections 39 and 40 of the National Social Security Fund (NSSF) Act (Cap 222), as amended, the Board of Directors submitted its recommendations to the Minister of Gender, Labour, and Social Development (the Minister) for the appointment of a Managing Director and Deputy Managing Director. This is to inform NSSF members, stakeholders and the public as follows:

i) Patrick Ayota has been appointed Deputy Managing Director for a five-year period with effect from 30th November 2022.

The Board assures NSSF members, stakeholders and the public that the Fund remains stable, and its operations are running normally.

Patrick Ocailap
FOR THE CHAIRMAN NSSF BOARD OF DIRECTORS.