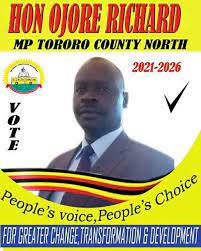 The High Court in Tororo has sentenced Richard Ojore, a former MP aspirant for Tororo North County to 50 years in jail after being convicted for murdering Sinambio Oketcho, the Mukuju sub county National Resistence Movement (NRM) Registrar during the NRM party primaries in 2020.

Accordingly, police arrested Ojore, in the NRM primaries, Moses Emojong and Geoffrey Imai and charged them with murder, aggravated robbery and attempted murder.

According to prosecution, on September, 4, 2020 at 1pm during the NRM primaries, the deceased arrived at Akoret B polling station in Akoret zone in Tororo district as his routine was to check on various polling agents deployed at polling stations.

However, here, the registrar who was together with Thomas Emukurut, a boda boda rider was attacked by the three accused persons on grounds of being biased and that he was rigging the NRM primaries for another candidate.

Sinambio was hit with a Masai club on the neck while the boda boda rider was severely beaten on various parts of his body and robbed of cash Shs. 45,000 and a mobile phone. The NRM registrar later died as he was being rushed to hospital.

Consequently, each of the three people was sentenced to 30 years for the murder whereas the former MP aspirant and Imai were also sentenced to an additional 20 years after being convicted of attempted murder. However, the trio was acquitted of the charge of aggravated robbery after evidence by the state failed to pin them.

However, Justice Nambayo said the two sentences will run concurrently.