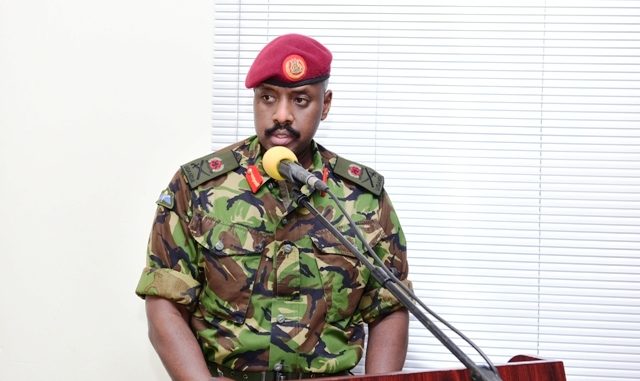 Gen Muhoozi Kainerugaba has finally apologised to Kenyan President William Ruto over his recent remarks relating to capturing Nairobi in two weeks.
“I have never had any problem with Afande Ruto. If I made a mistake anywhere, I ask him to forgive me as his young brother. God bless East Africa,” Gen Muhoozi tweeted on Thursday evening.
Gen Muhoozi was last week on the receiving end of criticism by members of the public both Ugandans and Kenyans over his series of controversial tweets that left many with tongues wagging.
“It would take us, my army and me two weeks to capture Nairobi. After we capture Nairobi, where should I live? Westlands? Riverside?”
He added, “I am happy that members of our district in Kenya have responded enthusiastically to my tweet. It’s still two weeks to Nairobi.”
He would later appear to blame retired President Uhuru Kenyatta for not contesting for a third term in the August 2022 polls won by his former Vice President William Ruto and suggested that he should have changed the Kenyan constitution to remain in power.
“Haha! I love my Kenyan relatives. Constitution? Rule of law? You must be joking! For us (Uganda), there is only the revolution and you will soon learn about it!”
The development was seen by many as one that was capable of creating a diplomatic row between the two neighbouring and friendly countries.
Following the explosive tweets, President Museveni apologised to Kenya over the behavior of his son.
“I ask our Kenyan brothers and sisters to forgive us for tweets sent by General Muhoozi, former Commander of Land Forces here, regarding the election matters in that great country. Very sorry, ndugu zetu Wakenya. Also sorry to the Ugandans who could have been annoyed by one of their officials meddling in the affairs of brother Kenya,”Museveni said in his public apology.
He followed the same with the dropping of Gen Muhoozi from the position of the Commander of the Land Forces in the UPDF but to the surprise of many, he promoted him to the rank of four star general.
Museveni however defended the decision saying his son remains a useful officer of the UPDF.