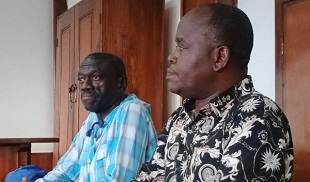 The Buganda Road Magistrates Court has started hearing the case in which Dr. Kiiza Besigye, and the former Rubaga South Parliamentary candidate, Samuel Lubega Mukaaku, are accused of inciting violence. The offense stems from their June 14th, 2022 protest against the skyrocketing commodity prices, which nearly doubled in less than a year.
The prosecution accuses the dou of staging an illegal assembly in Kikuubo Shauriyako parish, Kampala Central Division where they allegedly made statements indicating that it would be desirable to demonstrate with the aim of causing damage and destruction to property.
In the previous session held in September, Buganda Road Grade One Magistrate Asuman Muhumuza, gave the prosecution till October 24th, to conclude investigations into the matter to pave way for the hearing of the case, or else he dismisses the charges.
When the matter came up for hearing on Monday, the prosecutors led by Ivan Kyazze presented David Nahamya, the Head of Operations at Kampala Central Police Station-CPS as their first witness. Nahamya told the court that he was at CPS when he received a call from the officers in the CCTV room informing him that a group of people had gathered at the Quality building, Mini Price and caused a lot of commotion.
According to Nahamya, he mobilized officers to go and find out what had caused the gathering. He said that upon arrival in downtown, they found commotion, and Dr. Kizza Besigye and Mukaaku had parked their vehicle in the middle of the road while mobilizing people in Luganda using loudspeakers to rise against the government.
He explained that the duo’s action blocked traffic and people from accessing their shops. Nahamya revealed that when he tried to engage the suspects, they were uncooperative and turned violent against his colleague who tried to grab the loudspeakers from them. The court heard the duo later locked themselves in Besigye’s motor vehicle, which prompted Nahamya to call for reinforcement to restore normalcy downtown.
A team of officers moved in and towed Besigye’s vehicle to CPS where it was kept to date, as one of the prosecution exhibits. After Nahamya’s testimony, the suspects’ lawyers led by Erias Lukwago applied for the release of Besigye’s impounded motor vehicle to ease his movement, saying their client is currently inconvenienced. Kyazze asked for more time to respond to the application, saying he needed to consult his superiors.
Muhumuza adjourned the case to October 31st, 2022 to first solve the issue of Besigye’s vehicle before the matter can proceed for further hearing of more prosecution witnesses. Besigye and Mukaaku are out on bail, which has been extended until next week. Besigye told journalists that the charges are aimed at depriving them of their property and silencing their efforts to criticize the ruling government.