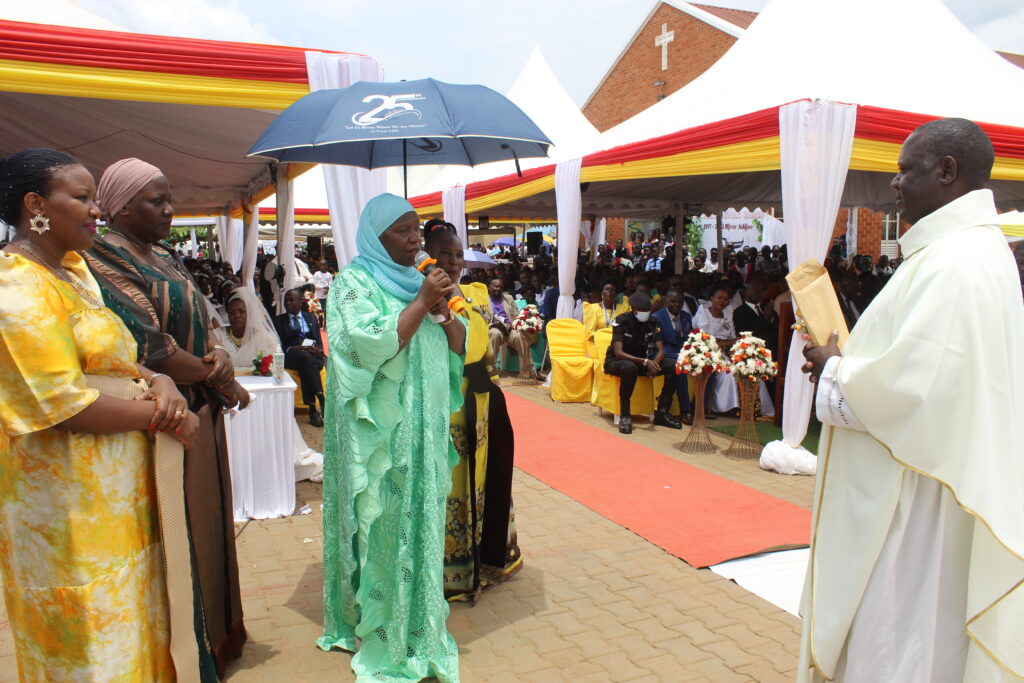 The Kampala Minister Hajjat Minsa Kabanda has urged religious leaders to be archers in fighting against the vices driven by the whites in schools, Minsa said at St.Paul’s catholic parish while it was celebrating its silver jubilee in Mukono municipality.
Kabanda decried of the increasing vices of homosexuality in schools whereby children are paid 600000 shilling per month to recruit others. “pliz church leaders help us to rescue the nation against homosexuality, pliz be at the ore front” Minister Kabanda Said.
The Lugazi Diocese bishop, Christopher Kakooza, said it was time to thank the Lord for the sacraments the Catholic Church has achieved including the development of Mukono town where the monastery is located.
Bishop Kakooza however tasked the government to consider building roads and the rail line to ease traffic congestion so that Christians can enjoy it.
The resident district commissioner. Hajjat Fatuma Ndisaba called on the state minister of Education J.C Muyingo to buy titles for public schools in Mukono municipality because of the Mafias who are finishing them.
“Government was given land by some individuals but the government has delayed processing land titles and some ill hearted people have used this as an advantage to grab the school land and these schools are for the poor”. Said Ndisaba.
State Minister of Education Hon. Chirestom Muyingo praised the church for working with the government especially in putting education first and urged parents to take advantage of this opportunity.
Minister Robinah Nabanja, represented by Kampala Minister Minsa Kabanda, assured the people of Mukono that road construction plans are in full swing. Robinah Nabanja also gave out 10 million shillings to boost the church project.
The St. Paul’s monastery was started in 97 with a breaking off from Namilyango Monastery.