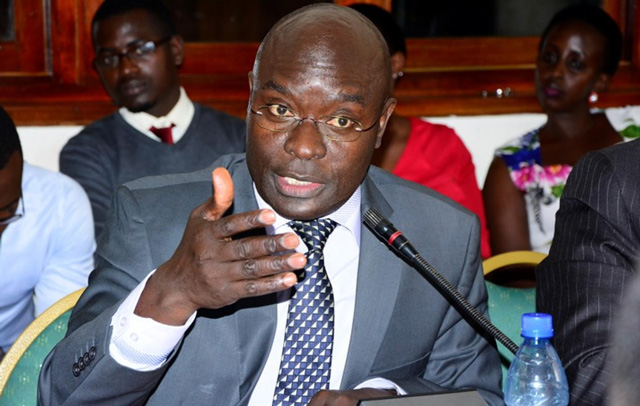 On the campaign trail, crowds fill city streets and roads to welcome presidential candidates and mostly they are dispersed in a very violent way by armed police and the army.

That meeting happened last week. The meeting was a tense prelude to the EC boss’ question-and-answer session with journalists that focused largely on what has not gone right in the violence scarred election campaigns including the brutal police and army enforcement of Covid-19 guidelines that limit gatherings to 200 people only

Asked why President Museveni and his ruling NRM campaign team get o scot-free yet they pull crowds too, the EC boss said, If candidate Museveni was seen flouting those guidelines, then we shall call him to order and ask him to comply with those guidelines; we are going to make sure that happens for every candidate. Below BAKER BATTE LULE reproduces an abridged version of the session.

We have seen posters of Kyagulanyi smoking weed on the perimeter wall of the Electoral Commission; who put them there?

The issue of the posters was just raised in the boardroom; I wasn’t aware, I must confess. Let’s be serious, you expect the chairman to go checking every wall; please give me a break.

I even asked my people in the room, are those posters on our perimeter wall and I was told no, they are on the premises of the ministry of Works. I think this commission is not comprised of people who will see illegalities and let them pass. There was no way we would see someone put up those posters and we let them.

They were not put there with the consent or express permission of the commission. I told my people; please if they are on our wall, can you remove them? We don’t want to be party to whatever politicking. We are a neutral umpire and we don’t condone anything that appears to attack the credibility or character of any particular candidate.

In all our work, you have seen we have been very impartial, inclusive and we have engaged every stakeholder at every level. Police disperse meetings of Kyagulanyi on the basis of gathering crowds. But we saw candidate Museveni with gatherings, which were not dispersed… We have said these guidelines apply across the board; whoever is a nominated candidate by this commission is required to observe the guidelines and standard operating procedures.

And we have said that even if the candidate is compliant but his mobilizers don’t comply, we ask the candidate to make sure that his people obey the guidelines. They are not issued in a discriminatory manner or meant to be observed by others and outed by other people.

If candidate Museveni was seen outing those guidelines, then we shall call him to order and ask him to comply with those guidelines; we are going to make sure that happens for every candidate.

Are you going to readjust the campaign roadmap to accommodate days missed by candidates after security stopped them from campaigning in certain districts?

The timelines in the roadmap are determined by article 6(2) [of the Constitution], which has already given us the deadline, which we can’t exceed to hold these elections. That’s why the first 30 days of the remaining 122 days to the end of the term of the president fall between January and February.

Remember we are not only carrying out presidential and parliamentary elections, we also have local government elections and we have about ve elections in those 30 days. Therefore, unfortunately, it’s not me or the commission to give more days. I wish I had the time, I would give presidential candidates, three or four months to traverse the country but the time was stolen during the Covid lockdown, which affected the entire country.

You said candidates should use the media to campaign, but some candidates have been dragged out of radio stations and other radios been switched off by the RDCs or security personnel…

It becomes difficult for the commission to issue a statement when we don’t control these radios. Secondly, the only media houses where the commissions has a whip, are state-owned media houses, where the law is very clear; these media houses shall accord equal opportunity to candidates. But privately owned media enterprises, we can only engage with the Uganda Communications Commission and the National Association of Broadcasters.

If a candidate has paid to be on air, why should you deny him the opportunity? By the way, why can’t these candidates go to court? Because the moment I give you my money to get on your radio and then you deny me access, then you have breached the contract.

If the candidate has paid for airtime and he is there in the allotted time, why do you refuse him to go on air? As a commission, we are going to follow this up with NAB and UCC.

You talked about having a meeting between candidates and the police, but you are going to talk about the same things you have been talking about without much success…

What’s new? We should never give up on dialogue. I asked the police whether they have ever had a meeting with candidates, and they said no. The commission has not said it’s handing over these people to police; it is the commission that is going to organize that meeting.

And the police will be part of that meeting and we shall emphasize the role of the commission and the duty of the candidate to ensure that whatever is going to be agreed upon is done. If there is any issue that our candidates encounter and it is brought to our attention, it’s the duty of the commission to raise that matter with the entity that has been alleged to be jeopardizing the candidature of these people. No one is above the law.

It seems like the security forces have taken over the elections; are you still in charge?

He is saying if you can’t handle the issues he is raising, you should actually resign…

I have not even dreamt of resigning, by the way; the dream has not yet occurred. Maybe when I get that revelation I will let the people know. I’m here to serve the country, I was entrusted with this office and like I said, let people be analytical.

Fortunately, we have been with the press from day one since we launched this roadmap in 2018. You have seen our success levels. There could be one or two challenges, but we have delivered on all those activities that we said we are going to carry out in spite of the challenges of Covid-19.

This commission has done tremendously well for someone to say that when it comes to campaigns, which constitute maybe 10 percent of the overall activities of the electoral roadmap, that the commission is not in charge. We have set the guidelines; we have told the candidates this is the period they are allowed to carry out campaigns, and we have given them security vehicles.

Who are the implementers to make sure that these things take place; the candidates and their supporters?

We are saying, take personal responsibility. The challenges that are coming up now, are they here because the commission has failed to do its work properly? Let us be objective instead of saying, Byabakama has failed, he should get out.

With the continued police disruption of political campaigns, can you still guarantee a free and fair election?

A free and fair election is not solely on the shoulder of the Electoral Commission. We have done our part up to this point where there are actors who are also required to make a contribution to ensuring that this process is free and fair.

To me, I can say provided other actors play according to the rules, observe the SOPs and work for peace and stability, we are going to have a free and fair election. But each one of us must play a role. Even the press must play a role because if you’re going to report inflammatory things only, then what are you doing?

When fire starts, it doesn’t say this gentleman is the one who started us, let’s spare him; no, it will also engulf you. Violence doesn’t discriminate; when you start it, it will also consume you.

Bobi Wine’s security detail has been changed; why?

In the meeting, the officer in charge of deployment of VIPs’ security, Commissioner Hadija Namutebi, suggested to candidate Kyagulanyi that she was contemplating changing his security detail, which is normal. They always do that even for us. But Kyagulanyi expressed concern; he was uncomfortable.

But the officer tried to explain that it was necessary. Kyagulanyi told us that the commander of his security detail was injured; so, in effect, his detail has no commander. I think Commissioner Namutebi’s suggestion was appropriate.

Secondly, she felt that there was need to beef up his security with fresh people who have not been running up and down. There is nothing strange or sinister about it. In my own understanding, it was done in very good faith