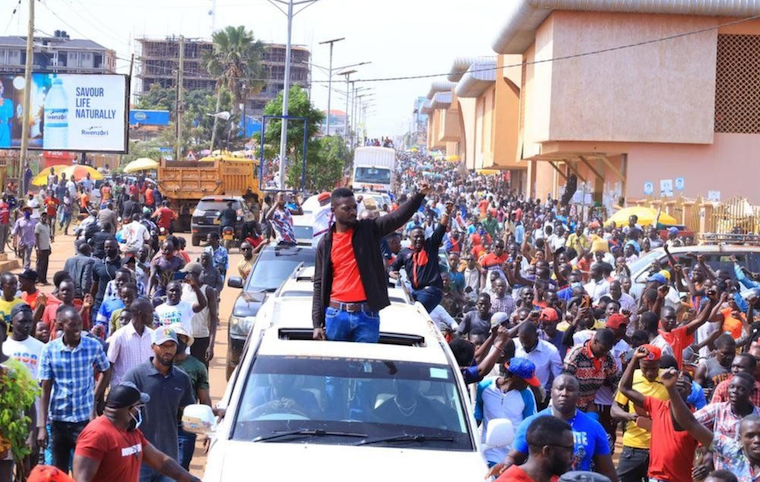 Tear gas welcomes Bobi Wine to Lira Town as police battled with his mammoth supporters who were welcoming hi
The National Unity Platform (NUP) principle, Robert Kyagulanyi Ssentamu toured Lira town in accompany of his party deputy Dr Zedriga.
Kyagulanyi was surprised after operations at the Radio station were halted shortly after the Radio station managing director notifying him that he had been requested not to interview him.
The chanting roadside gatherings were also dispersed as Police fired tear gas canisters to chase them away, telling that they would spread the deadly infectious Covid-19 disease if they keep gathering in large groups.
The manager stated that the move followed after learning that the NUP boss had no valid security clearance to be hosted.
“I returned from Kampala last night. UCC directed me to cancel Bobi Wine’s radio talk-show on grounds that he was not cleared by security to talk on the radio. He had booked airtime for a talk-show on Saturday morning at 10am. Bobi Wine had paid Shs500, 000 for a one-hour talk-show yet the normal rate is Shs1 million” said Elem
Kyagulanyi condemned the incident, blaming the Ugandan government for disrupting National Unity Party activities
He vowed not to give up together with his followers until Ugandans liberated themselves
The same incident happened in Mbale city as he was stopped from talking on the air waves of Bugisu Cooperative Union (BCU) FM