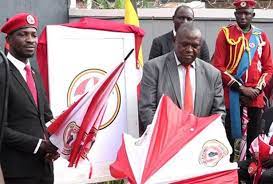 The Electoral Commission (EC) has clarified that the National Unity Platform (NUP) is still under the stewardship of Robert Kyagulanyi alias Bobi Wine.
This follows claims made this week by Moses Nkonge Kibalama who claimed that he had taken back the party leadership from the Kamwokya-based group led by Kyagulanyi.
Among the reasons he gave for the decision included mismanagement and lack of transparency at Kamwokya. The Kibalama faction held a delegates conference and even acquired a building in Church Zone, Kabowa in Lubaga division, which it claimed would house the new offices of the party.
However, the EC, in a letter dated June 22, addressed to Kibalama and Paul Ssimbwa both NUP members, its secretary Leonard Mulekwah, has maintained that Kyagulanyi is still the party president contrary to what Kibalama’s faction says.
In the letter, Mulekwah reminded Kibalama that prior to his resignation in 2020, he chaired a meeting that concluded election of office bearers, to whom he handed over the party presidency to Kyagulanyi who was subsequently voted by NUP’s National Executive Commission (NEC).
Mulekwah adds that EC has not yet received any formal communication from the party executive committee confirming Kyagulanyi’s resignation from his position or rescinding of other offices as claimed by Kibalama’s group.
“No communication is on record in respect to resignation or rescinding of the offices by the said Executive Committee, who according to Article 6.2(c) (i) of the party constitution should hold office for five years,” Mulekwah said.
“This is, therefore, to inform you that the convening of the delegates’ conference and election of the National Executive Committee ought to comply with the National Unity Platform constitution.”