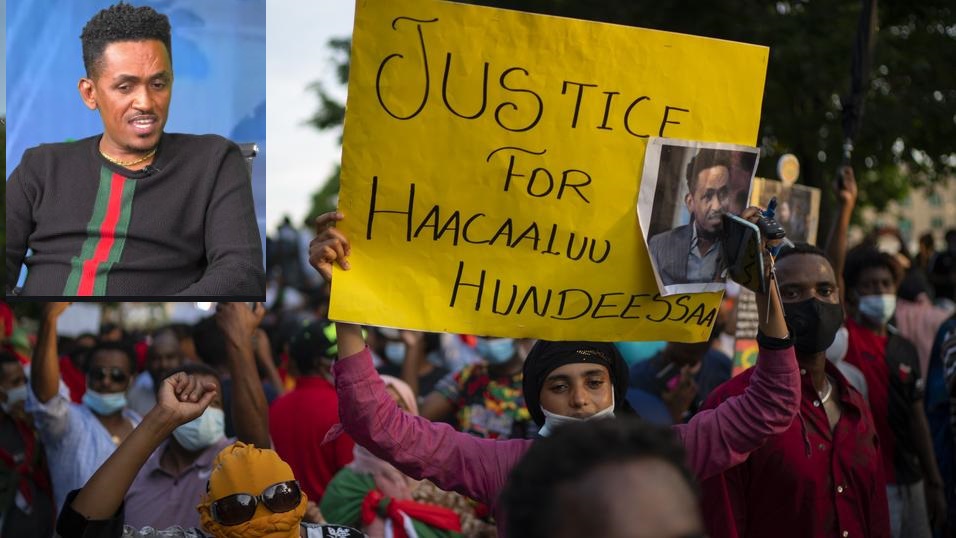 Security is high in the Ethiopian town of Ambo, after government deployed heavily for the funeral of popular musician and activist Haacaaluu Hundeessaa, whose killing in Addis Ababa earlier this week sparked two days of protests that killed more than 80 people.

A farewell ceremony began on Thursday with well-wishers laying wreaths in Ambo stadium and mourning the death of the 34-year-old musician from the ethnic Oromo group, Ethiopia’s largest. He will be laid to rest later at a church in Ambo, some 100km (60 miles) west of the capital.

“Haacaaluu is not dead. He will remain in my heart and the hearts of millions of Oromo people forever,” Santu Demisew Diro, his wife, said. “I request a monument erected in his memory in Addis [Ababa] where his blood was spilt.”

The singer was shot dead in the capital on Monday by unknown gunmen.

His songs had provided a soundtrack to a generation of Oromo protesters whose three years of anti-government demonstrations finally forced the resignation of Prime Minister Hailemariam Desalegn in 2018. Hailemariam was replaced by Abiy Ahmed, the first Oromo to become Ethiopia’s prime minister.

Following the killing, protests broke out on Tuesday morning in the capital and other towns and cities in the surrounding Oromia region. The military was deployed in Addis Ababa amid reports of armed gangs roaming neighbourhoods in a second day of unrest on Wednesday. Meanwhile, internet connectivity was down for a third day on Thursday, a common occurrence during political protests in the country.

“The riots and demonstrations we’ve seen in the past 48 hours were caused by the refusal of the government to have Hundeessaa buried in Addis Ababa.”

“The government felt that was not going to go well security-wise and said he should be buried in [his hometown of] Ambo.

“But his supporters, opposition members and officials thought it was befitting that an Oromo man and leading figure … should be buried in the capital.”

At least 35 people have been arrested this week, including fellow Oromo and media mogul Jawar Mohammed who was held after his supporters tried to intercept the singer’s body as it was being transported to Ambo.

Jawar was a prominent supporter of Abiy’s appointment but became more openly critical last year. His popular Oromia Media Network gives him the ability to mobilise support quickly across Oromia and his power base could pose a significant challenge to Abiy’s party in the country’s elections, originally scheduled for this year but postponed due to the coronavirus pandemic.

The funeral was broadcast live by the Oromo Broadcasting Network, which is owned by the Oromia regional state.

Police were turning people away from the stadium, according to one Ambo resident who tried to attend but met crowds of people who had been told to return home.

Members of the military, federal police and regional police were out in force, he told  the media.

“It is very sad that his body is accompanied by only a few people and security forces are keeping many others away,” one of Haacaaluu’s relatives, who had been allowed to attend the funeral, said.

Abiy has indicated that foreign forces may have been involved in assassinating the singer in an attempt to destabilise the country.

“One of the big questions is who actually killed the musician?” David Shinn, former US ambassador to Ethiopia, said.

“This is the match that touched everything off and I think what you’re seeing here is a great deal of ethnic unrest, which has been touched off by this incident,” he said.

The unrest could become Abiy’s biggest test since taking office two years ago. His rise to power ended decades of political dominance by ethnic Tigray leaders in the ethnically diverse nation of some 110 million people.

Abiy’s rule has ushered in greater political and economic freedoms in what had long been one of the continent’s most repressive states. He was awarded the 2019 Nobel Peace Prize for his reforms and his work to end a long-running conflict with neighbouring Eritrea.

But the rise in political activism has also led to an increase in unrest, with Abiy’s rule frequently challenged by local powerbrokers demanding more access to land, power and resources.

“The current prime minister did not really address the fundamental questions the Oromos have been asking for a very time,” Awol Allo, an Ethiopian lecturer in law at Keele University, told  the media.

“The Oromos have been demanding that their language be recognised as a national language, and nothing has been done in that regard, and some of the strategic steps that the prime minister has taken really angered a number of people,” he said.

Awol said the killing of a “towering figure” such as Haacaaluu “could ignite a significant level or anger, but it is also the accumulation of those expectations that didn’t go anywhere – so there are all those frustrations that are boiling.”

In a statement, Human Rights Watch said “the government’s responses to the protesters risks enflaming long-simmering tensions”, adding the internet shutdown “amplified concerns that people are being silenced and that human rights abuses and communal violence … are not being addressed”.