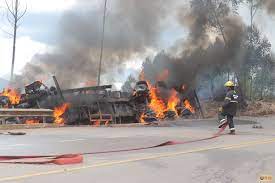 Two people sustained severe injuries after a fuel tanker rolled down Kabaraga hills and burst into flames at Kirengere in Kyanamira sub-county, Kabale district along the Mbarara-Kabale highway.

The driver only identified as Bruhan and his turn man sustained burns and are currently admitted at Kabale Regional Referral Hospital.

Elly Maate, the Kigezi Region police spokesperson, says that the fuel tanker, registration number, SSD 775Q was on its way from Kampala to deliver fuel to Baj petrol station Rwakaraba, in Northern Division in Kabale town.

Maate says that the tanker was carrying 300,000 litres of fuel when it rolled down at about 11.30am and hit an electricity pole, which caused sparks leading to the fire after failing to negotiate a corner.

He says that a team from the Police and Rescue Services Directorate managed to extinguish the fire before spreading to neighbouring the homes. In December 2012, a fuel tanker registration number KAW 879W/ZC401 from Nakuru in Kenya exploded in the same area killing the driver, Paulo Maina.