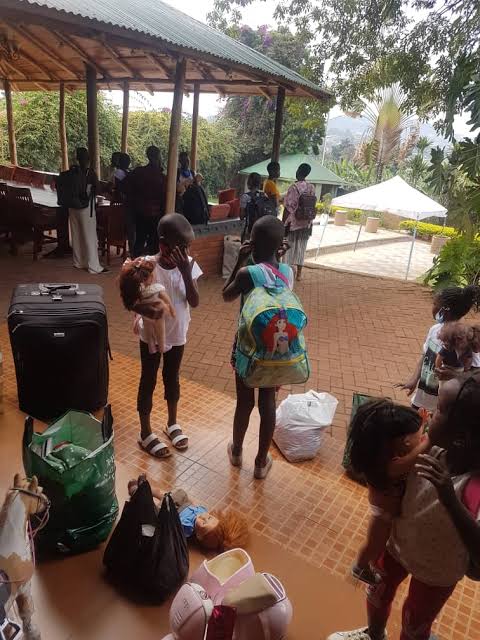 In the recent past, teenagers around the world have been busted engaging in some worrying and unbelievable activities.
Many teens have of late been engaging in drug abuse and some shocking illegal activities that endanger their lives at tender ages.
In a shocking event, Police officers stormed a guesthouse on Muyenga Hill in Kampala and rescued 14 girls found living in terrible conditions and most of them were minors.
The girls were reportedly being trained in conducting unnatural sexual acts including allegedly engaging in unnatural acts with dogs and being prepared to travel to a European destination for unspecified duties.
Most of the girls are minors aged below 14, who by law cannot be employed, nor travel abroad without parental/guardian’s consent. Only one girl is said to be 19.
Acting on a tip-off by concerned residents in Makindye Division, a Kampala suburb. Kampala Metropolitan Deputy police spokesperson, Luke Owoyesigyire said that the 14 girls were found at Papaya Holiday Home in Muyenga B Zone, Makindye Division.
He said the older girl, aged 19, claims to be an S.6 student of Namungoona Parents secondary school in Rubaga Division.
Owoyesigyire said that they were under the custody of a lady called Dorothy Ndagire who purports to operate an NGO called Maya Project, Uganda Chapter working in collaboration with another in the UK but not registered under the laws of Uganda.
“We went to the guest house and found the girls living in bad conditions and the information we got is that they were being forced to sleep with dogs,” said Owoyesigyire, adding that the girls have since refused to give information regarding where they came from and even their particulars.
Oweyesigyire revealed that the police have arrested and detained Ndagire amid ongoing investigations and the girls have since been taken to a home awaiting information regarding where they came from and who their parents are.