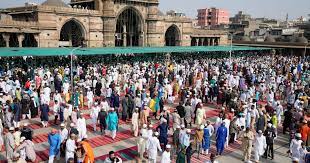 The world’s population is expected to reach eight billion on November 15, the UN forecast Monday in a report that said India will surpass China as the most populous country on earth in 2023.
The forecast by the UN Department of Economic and Social Affairs said the world’s population is growing at its slowest pace since 1950.
It should hit 8.5 billion in 2030 and 9.7 billion in 2050, peaking at around 10.4 billion people in the 2080s before steadying at that level until 2100.
That overall population milestone “is a reminder of our shared responsibility to care for our planet and a moment to reflect on where we still fall short of our commitments to one another,” Secretary General Antonio Guterres said, without citing specifics.
“This milestone will attract much attention and debate, and likely scaremongering over “too many” people. That would be a mistake,” said a statement by United Nations Population Fund (UNFPA) ahead of World population day.
“The population story is far richer and more nuanced than a single number can capture. There may be more people in the world today, but equally important is the unprecedented demographic diversity we see within the global population. A growing number of countries face population ageing, and roughly two-thirds of the world’s population now live in a country or area with below-replacement fertility, or fewer than 2.1 births per woman. Others have youthful and growing populations. And more people are on the move, either by choice or driven by crises ranging from conflict to climate change. Understanding these shifts is critical to harnessing opportunities and mitigating potential downsides,” it added.
UNFPA urged that achieving this demographic resilience starts with a commitment to counting not just numbers of people but also opportunities for progress and barriers that stand in its way.
The organization called for transforming discriminatory norms that hold individuals and societies back. It leads us to economies that work for all people instead of just a few, and to a fair use of resources so that we can mitigate risks and meet the needs of current and future generations.”
“We are each much more than a number, as is the human family. Numbers matter, but let’s count carefully. A resilient world of 8 billion, a world that upholds individual rights and choices, offers infinite possibilities – possibilities for people, societies and our shared planet to thrive and prosper.”