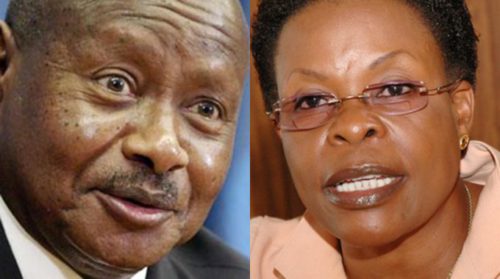 “When the white man came to Kenya holding a Bible, he found us with our land, he told us to close our eyes to pray. When we closed our eyes after prayers, we were holding the bible and they were holding our land”

Said Jomo Kenyatta as he justified the bloody Mau Mau war that ousted the colonialism out of Kenya. Writing this article on January 25, am thinking how befitting that we should remember Kenyatta’s words on the eve of Jan 25th as we wait to celebrate (my foot) the anniversary of the NRM victory!

We slept for twenty years, when we woke up we were holding peace while he held our assets. And like Kenyans we shall have to fight to extricate ourselves from Museveni’s paws, now deeply enrenched in our everything. It is not going to be easy because no thief, robber, looter or colonialist ever let go of their loot easily. And Museveni has been more cunning than most, saving the gun for the final onslaught of Uganda.

Those who may not have noticed Inspector General of Police, Kale Kayihura’s latest orders not to hold any congregation above 20 People without his authority is worse than article 269 of the 1995 constitution which banned political party activities except those of NRM party, and worse than that Political Parties and Organisations Act, (PPOA) which restricted the political party activities to their headquarters for which it was ruled unconstitutional by High court.

If fully enforced for which Kayihura Decree is intended to be, one can not baptise his or her child and hold a party of more than 20 people but that is not the tragedy.

The tragedy is that most Ugandans especially NRM MPs have not realised that this country has been repackaged as a revised one party, vicious (repeat vicious) dictatorship with their support.

It has been whispered for long that President Museveni is not a Ugandan by birth which I used to dismiss on grounds that he is a Ugandan now, that it is his performance that matters.

Watching how he has systematically destroyed every sector of this country; the civil service, health, education, industries, police, Parliament, judiciary, transport, the executive am beginning to wonder whether a born national would do this to his or her country.

Museveni seems to have a vengeance on Uganda, as if the country was unkind to him and must pay for his suffering, No one can do what Museveni has done to Uganda unless they have a score to settle.

I appreciate the Rwandese fighters that left Uganda in 1990, most of whom born and bred in Uganda, could have assumed Ugandan citizenship but their hearts never left Rwanda even when they were not yet conceived in their mothers wombs.

I understand that like every Jew’s heart (born or unborn) remained in Israel during the 1000 years of exile, and yearning to go back, so the Rwandese hearts born and unborn yearned for home.

But where is Museveni’s heart? Where does he yearn to go and if no where, why destroy the only country he knows? Can’t he see that this sectarian thing he is nurturing is not only dangerous but also unsustainable? Does one has to be a soothsayer to know that he is leading Uganda to a terrible genocide with only one community eligible for state house scalarships, lucrative jobs, land allocation, control of security Organisations and National finances?

Isn’t it obvious that time will come no matter how long it might take when all his misdeeds will be undone at a great cost to his favoured community?

Museveni might accuse me for a sectarian article but I hope his overpaid intelligence tell him that these words are on every pair of lips in Uganda and if he doesn’t know it he is the only one.

My appeal is to the influencial Bahima – restrain Museveni, let him not do this to you, it is not sustainable, think of your children, think of the majority Bahima who are not party to this madness, but will pay the ultimate price when you, the beneficiaries of the madness have fled.

When the white man found Mau Mau and Mugabe’s Zimbabwe too hot to handle they went home, when Amin showed Indians the door they had India to call home and when things become unbearable for the White South Africans , they can evoke their Dutch or British ancestors and return home, but where will the innocent Bahima go, their home being Uganda? Celebrate wisely restrain Museveni.