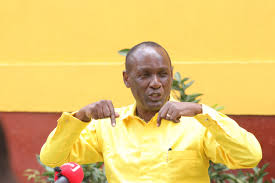 NRM vice-chairman eastern region Capt. Mike Mukula has asked youth in Bugisu sub-region to vote for President Museveni in the coming general election on grounds that he’s more qualified than any of the other 10 people challenging him for presidency.

In a veiled reference to Kyadondo East MP Robert Kyagulanyi alias Bobi Wine, who’s aspiring to unseat Mr Museveni who has been in power since 1986, Mr Mukula on Wednesday said: “Someone with a diploma in Music Dance and Drama [MDD] wants to lead this country called Uganda. This is not a theater.

“You’re taking drugs and you say you are a youth? So, we need a youth who is disciplined ideologically and spiritually. That is what I would like you to be and that is what I have been telling my children and grandchildren.”

The incumbent president Wednesday – also made a withering assault on the other 10 opposition figures lined against him in the January 2021 polls.

“There is no opposition I cannot defeat. What are you opposing?” Mr Museveni said.

He continued, “When we were in Luweero fighting, we had some Uganda People’s Congress [UPC] there. Even though we were fighting, I would go to the UPC people and ask them what are you fighting for?” Mr Museveni said before he pondered, “Like now what are they opposing exactly? You should talk to them.” Both Capt Mukula and Mr Museveni were addressing NRM youth leaders in Bugisu sub-region at Mbale senior secondary school.

The pop star turned politician is widely seen as Mr Museveni’s biggest challenger as the nation fast-gears towards the elections slated for January 14, 2021.