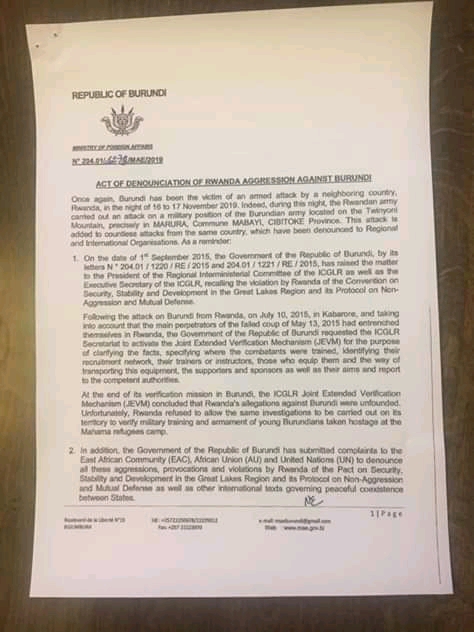 There is heightened tension between Rwanda and Burundi,  after the government of Jean Pierre Nkurunziza  denounced the continued attacks on its territory by the Paul Kagame led Rwandan army.

Officials in Bujumbura claim that Rwandan military has severally carried out attacks on Burundi, with the most recent one  being that of November 16-17, 2019,  although the International Community has decided to turn a blind eye and deaf ear to the various invasions.

The allegations are contained in a statement released by the Burundian Internal Affairs Minister Ezechiel Nibigira dated November 26, 2019,  in which Burundi details the number of times Rwandan army has attacked Burundi civilian and military installations.

The statement titled ‘ACT OF DENUNCIATION OF RWANDA AGGRESSION   AGAINST BURUNDI’, reads in part thus;Once again, Burundi has been victim of an attack by a neighbouring country, Rwanda in the night of 16-17 November 2019.  Indeed during that night, the Rwandan army carried out an attack on a military position of the Burundian army, located on the Twinyonyi mountain, precisely in Marura, Commune Mabayi, Chibitoke Province.

This attack is added to countless attacks from the same country, which have been denounced to Regional and International Organizations.As reminder;On the date of 1st September 2015, the government of the republic of Burundi, by its letters N204.01/120/RE/ 2015 and N204.01/121/RE/2015 has raised the matter to that president of the Regional Inter-ministerial Committee of the ICGR, as well as the Executive Secretary of the ICGR, recalling the violation of Rwanda of the convention on Security, Stability and Development in the Great Lakes Region and the protocol on  Non-Aggression and Mutual Defence.

Following the attack on Burundi by Rwanda on July 10, 2015 in Kabarore, and taking into account that the main perpetrators of the failed coup in May 13, 2015 had entrenched themselves in Rwanda, the government of the republic of Burundi requested the ICGR to activate the Joint Extended Verification Mechanism (JEVM), for the purpose of clarifying the facts, specifying where the combatants were trained, identifying their recruitment network, their trainers or instructors,  those who equip them and the ways of transporting the equipment, the supporters and sponsors as well as their aims and report to the competent authorities.

At the end of its verification in Burundi, the ICGR Joint Verification Extended Mechanism (JEVM) found that Rwanda’s allegations against Burundi are unfounded.

Unfortunately, Rwanda refused to the same Investigations to be carried out on its territory to verify military training and armament of young Burundians taken hostage at the Mahama Refugees Camp.

However, despite all the above, the government of Rwanda has since remained silent about Burundi’s accusations  and allegations. Kigali has up to today neither refuted or admitted the accusations.