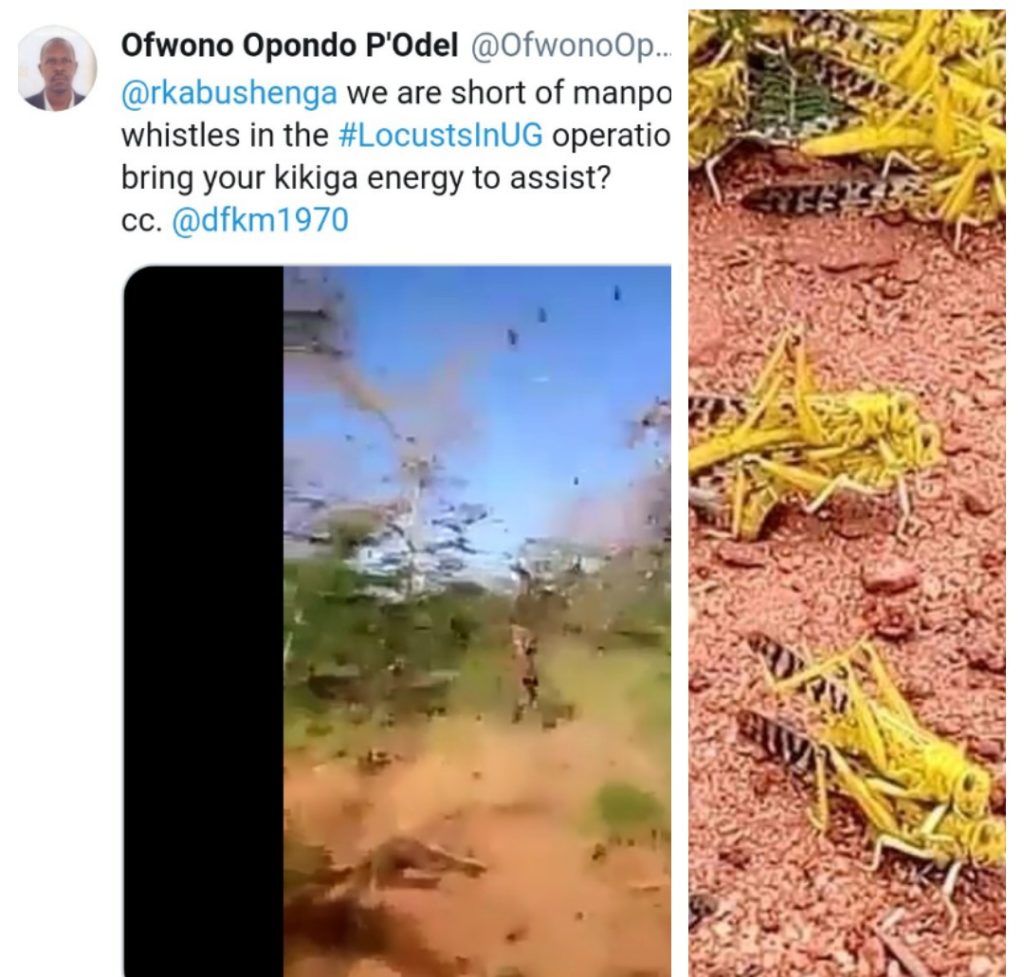 The desert locusts that invaded Uganda on Sunday have become too much to bear in several parts of the country that Uganda Peoples Defence Forces (UPDF) soldiers have started chasing them by blowing whistles.

This comes after the Uganda Media Center (UMC) Executive Director, Ofwono Opondo posted a video on Twitter of a UPDF soldier holding his gun and chasing after locusts while blowing a whistle.

Ogpondo jokingly tagged Vision Group CEO Robert Kabushenga in the tweet by writing thus; ” @rkabushenga we are short of manpower to blow whistles in the #LocustsInUG Operation. Can you bring your Kika energy to assist?”

Meanwhile, we have learnt that the Ministry of Agriculture has since deployed drones to spray pesticides in districts of Amudat,  Karamoja, Bulambuli and other districts.

Desert locusts have so far invaded six districts in Karamoja Sub-region and are advancing to other areas, government officials said last evening.

The insects that entered the country through Amudat District on Sunday afternoon have now spread to Moroto, Nabilatuk, Nakapiripirit, Napak and Abim districts.

“ The swarm of locusts was reportedly seen at Alerek Hill in Labwor County of Abim District… Spray aircraft will arrive in Karamoja tomorrow …Two international experts will join Ugandan experts in Karamoja tomorrow,” a statement shared by Mr Martin Owor, the commissioner for disaster preparedness and management at the Office of the Prime Minister reads in part.

This came as government delivered 18,000 litres each of cypermethrin and Chlorpyrifos to the sub-region spray the locusts.

But experts doubted the effectiveness of the chemicals in killing locusts, saying they are meant to kill ordinary insects such as cockroaches and fleas.

However ace journalist Charles Onyango Obbo, while warning about the chemicals being used to spray locusts tweeted thus;”Uganda uses Cypermethrin & Chlorpyrifos to spray locusts…but experts say they’re ineffective & meant to kill ordinary insects such as cockroaches & fleas…and harmful to useful insects such as bees and…humans if exposed to large quantities.”