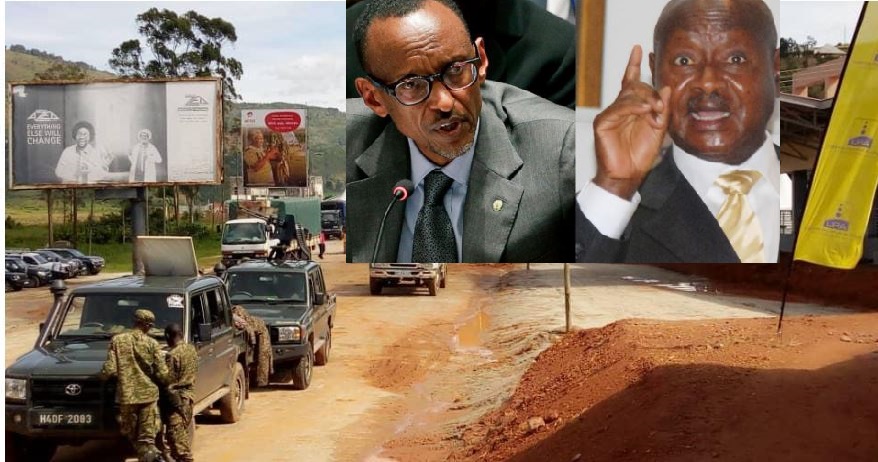 Security has been tightened at Katuna, the border point between Uganda and Rwanda, ahead of a historic meeting between Presidents Yoweri Museveni and Paul Kagame, on Friday afternoon.

The meeting is aimed at solving the impasse between the two countries in a bid to resolve a continuing dispute between the two leaders. For years, the two leaders were by each other’s side and supported one another to climb the ladder of power in their respective countries, although they later fell out with each other.  At the helm of their fallout, Kagame  closed Uganda’s borders to Uganda, after he accused Ugandan authorities of arbitrarily arresting and detaining Rwandan nations in Uganda. It thus remains a matter of hours before the world knows whether Museveni and Kagame will solve their differences or not.

It should be noted that in 1986, Kagame was part of the rebel fighters led by Ugandan President Museveni that took power in Kampala. Almost a decade later, Museveni returned the favour by arming and supporting Rwandan rebels led by young Kagame to seize power in Kigali.

The two longtime allies even teamed up again in 1996 to bring down the flamboyant Mobutu Sese Seko, one of the continent’s longest-serving leaders, and installed Laurent Kabila as president in the neighbouring Democratic Republic of the Congo (DRC).

But more recently, relations between the two leaders have been, at best, frosty. Kagame, 62, accuses Museveni of backing rebel groups and dissidents who want to bring down the government in Kigali.

Speaking at a news conference last March, then-Rwandan Minister of Foreign Affairs Richard Sezibera accused Kampala of supporting the Rwanda National Congress (RNC) and the Democratic Forces for the Liberation of Rwanda (FDLR). Rwanda considers both groups to be “terrorist organisations”.

A month later during a speech to mark 25th anniversary of Rwanda’s genocide, a visibly angry Kagame warned Uganda against interfering in his country’s internal affairs.

“Those who think we have not seen enough of a mess, and want to mess with us, whether from here or from outside, I want to say: We will mess up with them big time,” said Kagame, who has accused Uganda of sponsoring attacks in his country.

“We are going to raise the cost on the part of anybody who wants to destabilise our security,” Kagame said in November.

Kigali has also accused Kampala of targeting its nationals, with the government advising Rwandans to avoid travelling to Uganda.

However, Museveni denied that his country supports the rebel groups and instead accused Kigali of trying to violate Uganda’s sovereignty. It is “wrong” for “Rwanda agents to try to operate behind the Government of Uganda,” Museveni, 75, said in the letter he sent to Kagame in March last year.

Uganda claimed that Rwandan soldiers entered its territory in the southwest district of Rukiga and shot and killed two suspected smugglers last May. Uganda’s foreign ministry condemned “the criminal, brutal and violent act by the Rwandan soldiers” against its civilians.

Kampala has also Rwanda of supporting the Allied Democratic Forces (ADF) rebel group, which has been blamed for several attacks in Uganda and eastern DRC that have left hundreds of people dead. Rwanda denies the charges.

The long-simmering feud snarled regional trade in February when Rwanda closed its busiest road crossing point known as Katuna to Ugandans and Gatuna to Rwandans – to Ugandan cargo trucks. Rwanda briefly opened the crossing in June before closing it again.

“On the Rwandan side, it is the ordinary citizens feeling the dispute between the two countries. Prices of basic goods have increased considerably. On the Ugandan side, it is companies, for example, cement manufacturers, that are feeling it the most,” Goloba Mutebi, a Kampala-based researcher, revealed.

“Tanzania is the only winner here because the goods that Rwanda used to import from Uganda are now imported from there,” he added.

Nothing to worry About

There is fear that the dispute between the two leaders, with their sizeable military forces and spy network, could plunge the region into a fresh crisis. But observers say the dispute is nothing new.

“For more than a decade, Museveni and Kagame have not seen eye-to-eye. Kagame feels Museveni behaves as if Rwanda is not a sovereign country, that Rwanda is a province of Uganda. On the other hand, Museveni thinks Kagame is not grateful to him, that Kagame has forgotten who got him where he is today,” Yusuf Serunkuma, a Kampala-based political analyst, told the media.

But analysts in the region say it is in the interest of the two leaders, the longest-serving in their region, to resolve the dispute. As the two leaders meet in Katuna, traders and those living in the border area will hope the border crossing will be reopened – for good this time.