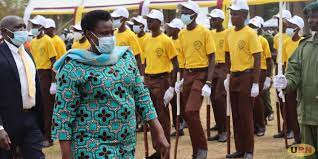 VP Alupo has cautioned students against resorting to strikes whenever they are expressing dissatisfaction over any situation in school.
She says that it is high time students embrace dialogue with the school administrators to iron out their grievances in an amicable way instead of resorting to violence.
She made the remarks while representing President Yoweri Museveni, at the Centennial celebrations for St. Henry’s College Kitovu, in Masaka City Saturday.
Alupo expressed concern that the student strikes don’t only cause infrastructural damages but also soil the reputation of the affected and impede the government’s broader objective of developing the education sector.
Her advice comes at a time when the country has in the recent past registered a series of school strikes in different parts of the country. In some of the incidences, angry students have torched buildings as students protest what they describe as unpleasant situations.
In his message delivered by Alupo, President Yoweri Museveni highlighted the great contribution of the White Fathers in establishing St. Henry’s College, one of the exceptional secondary schools that have for decades remained a yardstick for quality education in the country.
He indicated that government takes pride in the college for its significant contribution to the country’s education sectors and for producing well-trained and cultured students, capable of confronting the challenges ahead of them.
Museveni indicated that the government wishes to see that the strong moral values and academic standards of such traditional schools spread out to other schools that emerged after them. He urged teachers to put extra emphasis on cultivating good attitudes and survival skills among their students for their own good and the development of the country.
St. Henry’s College Kitovu was established by the White Father in 1922, under the superintendent of Bishop Heinrich Streicher with the objective of imparting Christian religious values and providing formal education to the boy children.
Later in 1926, the college was allocated to the Brothers of Christian Instruction to start running it. Reverend Brother Augustine Mugabo, the current College Headteacher indicates that they apparently have 1,400 students from a humble population of 23 students, when it began in 1922.
He said after its centenary anniversary, the college administration has found it necessary to give back to the community around it by constructing a multipurpose community training center, with intention of providing survival vocational skills to the general public to support their survival.
“We are no longer going to close the college during holidays, we want the general public to come to the center and acquire these survival skills at no cost such that they can go back and develop themselves and the country,” he indicated.