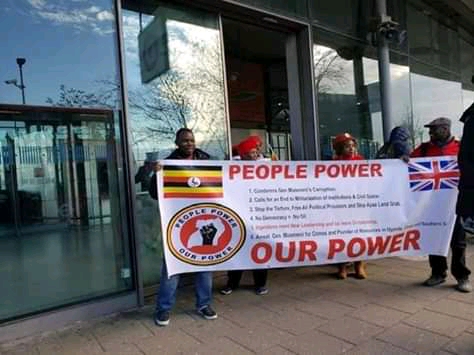 Several Ugandans living and working in the United Kingdom have today demonstrated   outside a building where President Yoweri Museveni was having a meeting.

Waving placards and singing anti Museveni slogans, the protesters the caught the attention of media when chanted words like ‘Poor Health, Poor Education, Dictator. Museveni must Go,’ among others, as they walked along the streets.

However, the protesters were later peacefully removed from the streets by police such that they would not disrupt the traffic flow in London.

There are thousands of Ugandans in the United Kingdom who ascribe to People Power, a pressure group that is led by Kyadondo East Member of Parliament Robert Kyagulanyi aka Bobi Wine.

Museveni, whom Bobi Wine wants to oust in the 2020 elections, is in London where he went to attend the UK-Africa Investment Summit 2020, which was attended on Tuesday by heads of state from several African countries.