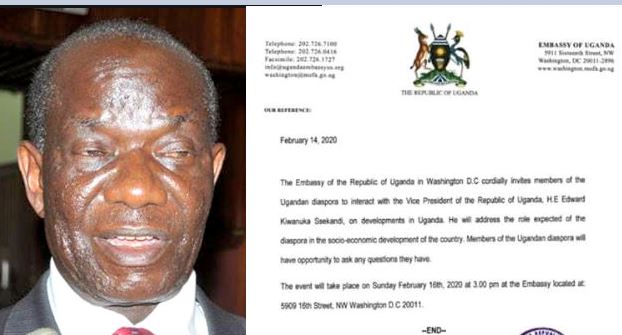 Ugandans living in Washington, DC, in USA, have rejected a meeting with Vice President of Uganda Edward Kiwanuka Sekandi,  which had been organized by the Ugandan Embassy in America.

Our sources reveal that after sending out invitations to all Ugandan urging them to  come in big numbers to interact with VP Sekandi, the embassy was forced to cancel the meeting at the last moment, fearing hostility from Ugandans who don’t subscribe to the  Nationall Resistance Movement (NRM)

A source within the Embassy revealed that the cancellation came as a result of pressure exerted by disgruntled Ugandans in the USA who had organised a demonstration against this meeting.

The meeting was meant to take place on Sunday February 16,  2020 and Ssekandi is already in Washington for the same program, but it has since been canceled.

“On arrival, he was told about the scheduled demonstration and he said he can’t bear with the embarrassment,hence calling off the meeting” The source revealed.

THE EMBASSY OF UGANDA IN WASHINGTON D.C WISHES TO INFORM THE UGANDAN DIASPORA COMMUNITY THAT DUE TO ABRUPT AND UNAVOIDABLE CIRCUMSTANCES, THE MEETING WITH THE VICE PRESIDENT OF UGANDA, H.E EDWARD KIWANUKA SSEKANDI, HAS BEEN CANCELED.

WE REGRET ANY INCONVENIENCES CAUSED BY THIS CANCELLATION.”