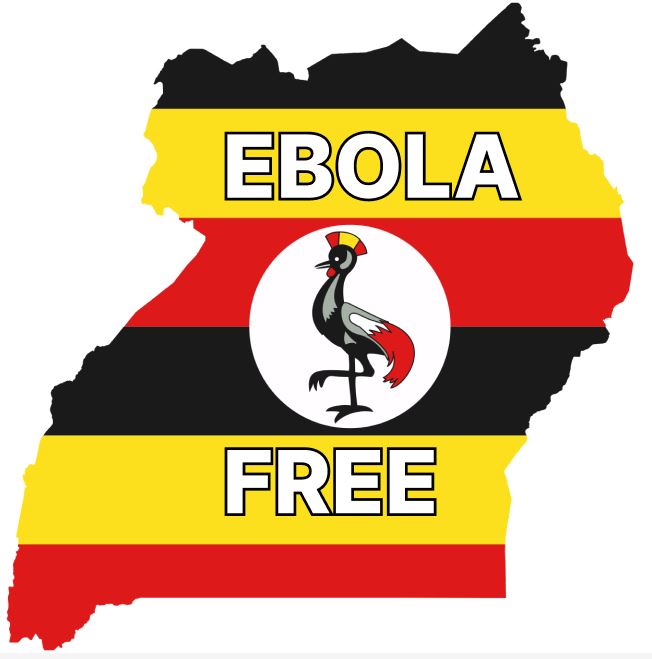 The Ministry of Health, Dr. Ruth Aceng has officially declared Uganda free from the deadly Ebola virus.
Addressing journalists, the minister said that having spent two incubation cycles of 21 days each, making a total of 42 days yesterday January, 10, 2023, since the discharge of last confirmed case on 30th November 2022, Uganda is now Ebola free.
“Having registered no new Ebola case, despite sustained intense surveillance both at the epicenter districts and nationally, I now confirm that all transmission chains have been fully interrupted and take this opportunity to declare that the outbreak is over and Uganda is now free of active Ebola transmission,” Dr. Aceng said.
In September last year, Uganda confirmed an outbreak of Ebola caused by Sudan ebolavirus in Mubende and Kassanda districts.
In the last four months, since the outbreak, 143 cases of Ebola have been confirmed, 85 of which were males and 58(41%) females whereas by age, 26 representing 8% were children while 117(82%) were adults.
The virus has claimed the lives of 55 people.
The health minister on Wednesday explained that following the outbreak, government set up an on-site Ebola testing mobile laboratory in Mubende district, where samples were picked, tested and results released within 6 hours but also constructed 353 bed capacity treatment units in Mubende, Madudu, Kassanda, Mulago and Entebbe and equipped them with medical supplies and drugs
“Government trained over 2,339 health workers of different categories from both public and private facilities. The healthcare workers were particularly trained in Infection Prevention and Control (IPC) against the deadly Ebola Sudan Virus Infection, Psychosocial support and care for both patients and affected families and enhanced clinical care for the Ebola positive patient. We enhanced the surveillance system in all affected district; listing and contact tracing for 21 days, daily follow up of all contacts and active case search in the affected districts but also carried out EVD Mortality surveillance (testing of all dead bodies for Ebola) in Kassanda, Mubende Masaka, Jinja, and Kampala districts.”
Dr. Aceng said all these interventions ensured the fight against Ebola is a successful one but said, going forward, the ministry will continue to monitor the Ebola survivors and support them to re-integrate in the community.
“ I urge the population to remain vigilant and implement the standard operating procedures and report any person in the community that present with Ebola-like symptoms including sudden onset of fever, headache, weakness, join pains, vomiting, bloody diarrhea or urine, bleeding from body opening) to the nearest health facility or call the ministry.”