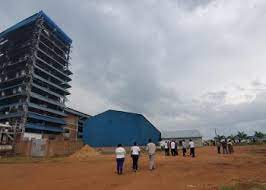 Police in the Hoima district arrested two employees of Hoima Sugar Limited identified as Ezra Katabalirwe and a one Wakame, accused of staging an accident in which they robbed the company accountant of Shs 239 million in cash.

This was revealed on Monday in a message by the Inspector General of Police. He congratulated a Joint Security task team for the successful operation which led to the recovery of at least shillings 143 million from the suspects.

The suspects were behind the robbery of the shillings 239 million from a one Ganesh Suresh, an Indian national and top manager of the Albertine-based sugar factory last week.

According to police, Ganesh had gone to withdraw the money as salary for the workers but his routine movement was closely monitored by some suspects who are also staff in the factory.

It is said that the suspects stage-managed an accident using boda boda motorcycles at a place called Kabwoya. When the driver jumped out of the car to check on the victims, the suspects then robbed three bags that contained the cash.

“The Joint Task Teams responded quickly and recovered one bag with 88 million shillings and started tracking the suspects. We arrested Ezra Katabalirwe and recovered shillings 54 million on him and also got two motorcycles number UAQ 327Y and UBA 423Q that were used in stage managing the incident,” reads part of the statement by IGP Okoth Ochola.

In the meantime efforts are underway to track down two others namely, Ronald Mujulizi and his brother yet to be identified.

These are believed to have disappeared with the outstanding cash of 95 million shillings.

Addressing the press in Kampala, spokesperson Fred Enanga pointed out that there was gross negligence on the part of the managers at Hoima Sugar limited which led to this robbery.

“You cannot go to withdraw shs 239 million in a Harrier with only the driver and manager yet you know that these movements can be monitored by criminals,” he said.

He then encouraged companies to always seek services from security when transporting significant amounts of cash.