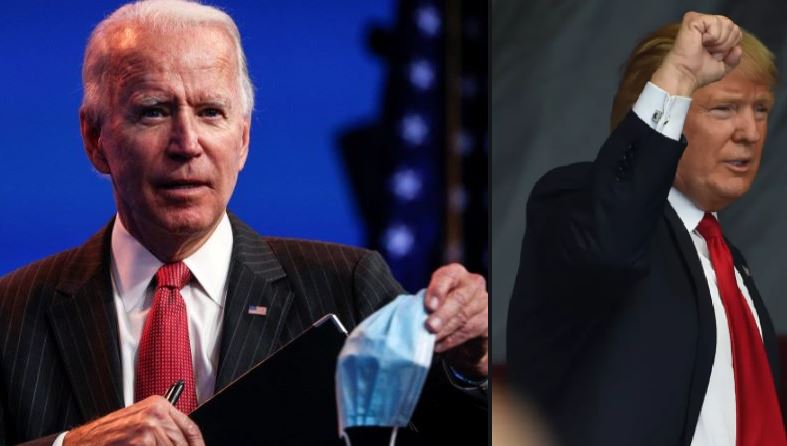 Outgoing controversial U. S president Donald Trump has finally bowed down to pressure from people of America and accepted to vacate the White House for newly elected president Joe Biden.

A key federal agency says Joe Biden, the ‘apparent winner’ of the 2020 United States election, is clearing the way for the start of the transition.

Biden has since been formally given the go-ahead by a federal agency to begin his transition to the presidency, shortly after the battleground state of Michigan certified him as the winner there.

With the rapid-fire developments on Monday, President Trump’s already languishing efforts to overturn his November 3 defeat appeared to be coming to a close.

The US General Services Administration (GSA), an independent agency, ascertained that Biden was the “apparent winner” of the election and informed Biden that his transition,  leading up to a January 20 swearing-in, could officially begin.

Michigan certified Biden’s victory Monday, and a federal judge in Pennsylvania moved on Saturday to throw out a Trump campaign lawsuit seeking to prevent certification in that state.

Murphy, a Trump appointee, has faced bipartisan criticism for failing to begin the transition process sooner, preventing Biden’s team from working with agency officials on plans for his administration, including in critical national security and public health areas.

“Please know that I came to my decision independently, based on the law and available facts. I was never directly or indirectly pressured by any Executive Branch official, including those who work at the White House or GSA, with regard to the substance or timing of my decision,” Murphy wrote in a letter to Biden.

Yohannes Abraham, the Biden-Harris Transition Executive Director, said the decision was a “definitive administrative action” that would formally begin the transition process with federal agencies.

“In the days ahead, transition officials will begin meeting with federal officials to discuss the Coronavirus pandemic response, have a full accounting of our national security interests, and gain complete understanding of the Trump administration’s efforts to hollow out government agencies.”

Thurgood Marshall Jr, a former Clinton Cabinet Secretary, said that the delay had been “unconscionable” especially at a time when the United States was facing an accelerating COVID-19 pandemic.

“It will make a tremendous difference (to Biden) with regard to the fast-moving developments with the pandemic and getting a vaccine out to the public,” Thurgood said.

He added that; “That process vitally important within the United States and globally can now move forward in a much more organised and sensible fashion.”

Biden will also need to make thousands of appointments, some of which will require confirmation hearings, while federal agencies will also need to adjust their priorities to the incoming administration, he added.

“They will have to make up for lost time,” Thurgood said. “It’s going to be a lot of hard work in the coming weeks.”

Trump, who had refused to concede the election, said in a tweet that he was directing his team to cooperate on the transition but is vowing to keep up the fight.

In a tweet, Trump wrote that Murphy and her team should “do what needs to be done with regard to initial protocols, and have told my team to do the same”.

“…fight, and I believe we will prevail! Nevertheless, in the best interest of our Country, I am recommending that Emily and her team do what needs to be done with regard to initial protocols, and have told my team to do the same,” Trump tweeted.

Separately, retiring Tennessee Republican Senator Lamar Alexander, who has repeatedly called for the transition to begin, released a statement Monday saying that Trump should “put the country first” and help Biden’s administration succeed.