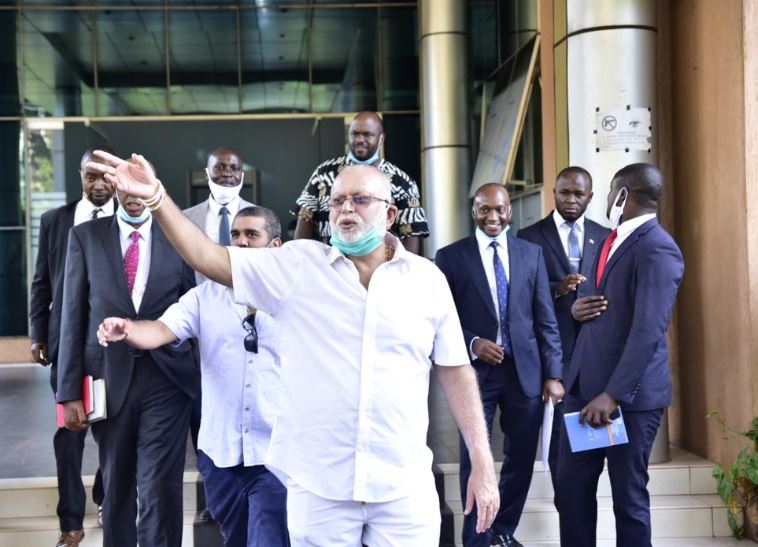 The court of Appeal on Tuesday morning dismissed an appeal that had been filed by Bank of Uganda, contesting a 2019 ruling by High Court Justice David K. Wangutusi,  in which he ruled that Bank of Uganda had no legal capacity to sue Sudhir Ruparelia on behalf of Crane Bank, which was under receivership.

The Matter arose from a case filed by BoU against Sudhir in 2016, alleging that the tycoon and others had pocketed Shs397Bn from Crane Bank prior to its being wound up and sold to dfcu  Bank.

When Justice Wangutusi dismissed the case with costs after BoU lawyers failed to adduce enough evidence to back up their allegations, BoU officials decided to appeal the ruling, which resulted into the dismissal of their Appeal today by the a Panel of  three Justices of the Court of Appeal.

Three justices of the court including Acting Chief Justice Alfonse Owiny -Dollo, Cheborion Barishaki and Steven Musota unanimously ruled that after a careful perusal of evidence; they too find no misconduct against Sudhir that would warrant litigation.

They hence forth ordered  Bank of Uganda to pay costs incurred by the businessman  to defend himself in both courts .

In their ruling read to court by registrar Mary Babirye, the Justices also confirmed that at the time  of filing this suit in January 2017, Crane Bank Limited  was already in receivership and  a  non-existing entity whose life time was terminated /ended when Bank of Uganda sold its assets to dfcu in October 2016.

The justices  were also  in  further agreement with trial Commercial Court  judge David Wangutusi that being in receivership; Crane Bank had no capacity to institute legal proceedings against its former Director.

Since they were dissatisfied with the above position, BoU officials the Court of Appeal last year to challenge the decision of justice Wangutusi to compel it to pay costs, claiming  that he did not fully hear the case but disposed it  off basing on a point of law .

Little did they know that the Court of Appeal would uphold Justice Wangutusi’s ruling like it did today. The court of Appeal  also further compelled BoU  to pay  costs of the suit, having found out that the Central Bank wrongfully dragged Sudhir to court .

Shortly after the ruling, tycoon Sudhir’s lawyers of Kampala Associated Advocates (KCAA) tweeted thus; “LITIGATION ALERT: The Court of Appeal has this morning dismissed with costs the appeal lodged by @BOU_Official in the UGX397bn Crane Bank case against Dr. Sudhir Ruparelia. The High Court judgment has been upheld.”

In his defense, Sudhir denied all the allegations and he has since counter-sued BoU, seeking compensation of $8m (Shs28 billion) in damages for breach of contract.

He asked the Commercial Court to dismiss the case arguing that the central bank over stepped its mandate in commencing court proceedings against him and his Meera Investments Company.

Presenting an objection against BoU, Sudhir through his lawyers Kampala Associated Advocates told Justice David Wangutusi that when dissolving a bank, BoU had three options including  putting someone else in its management – what is termed as statutory management, receivership or liquidation, but they quickly went for receivership and quickly sold it to dfcu Bank under shady circumstances, although the deal has since backfired for both of them.

Counsel Elison Karuhanga argued that BoU chose to go for receivership yet under the law, specifically only the manager and the liquidator of the said bank is mandated to file a suit and not a Receiver.

He further explained that, BoU as a Receiver could only dissolve or sell Crane Bank within 12 months but not sue its managers.

However, in response to the submissions of Sudhir’s lawyers, BoU through its lawyer Dr Joseph Byamugisha told court that when a financial institution is placed under receivership the power to commerce or to continue with a civil suit does not stop.

BoU on October 20, 2016 placed Crane Bank under statutory management for being under-capitalised.

The central bank attributed the under-capitalisation to mismanagement and insider lending, resulting in Crane Bank’s unsustainable non-performing loan portfolio. The bank was later sold to dfcu Bank in January 2017, although the central bank retained some of its liabilities.

Meanwhile, separate investigations by the Auditor General and Parliament recently found contrary information regarding the takeover and sale of Crane Bank. It was also discovered that BoU managers fell short of professionalism, having closed six more banks in the same shabby and illegal manner.

Officials at dfcu Bank and Bank of Uganda are now paying through their noses for illegally seizing and selling Crane Bank to themselves.