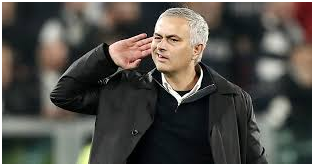 Jose Mourinho has been appointed as Tottenham’s new manager following the sacking of Mauricio Pochettino.

The former Chelsea and Manchester United boss Mourinho has signed a contract until the end of the 2022-23 Premier League season.

Tottenham chairman Daniel Levy, announcing Mourinho’s arrival, said: “In Jose we have one of the most successful managers in football.

“He has a wealth of experience, can inspire teams and is a great tactician. He has won honours at every club he has coached.

“We believe he will bring energy and belief to the dressing room.”

Mourinho added: “I am excited to be joining a club with such a great heritage and such passionate supporters.

“The quality in both the squad and the academy excites me. Working with these players is what has attracted me.” A Spurs statement read: “Jose is one of the world’s most accomplished managers having won 25 senior trophies.

“He is renowned for his tactical prowess and has managed FC Porto, Inter Milan, Chelsea, Real Madrid and Manchester United.

“He has won a domestic title in a record four different countries (Portugal, England, Italy and Spain) and is one of only three managers to have won the UEFA Champions League twice with two clubs, FC Porto in 2004 and Inter Milan in 2010.

The 56-year-old Portuguese won three Premier League titles over two spells in charge of Chelsea and returned to England to manage Manchester United in 2016.

He was sacked last December following a poor run of results and has been out of work since, most recently working as a pundit for Sky Sports.

Pochettino was dismissed after five-and-a-half years in charge, less than six months after he took Spurs to the Champions League final, with the club lying 14th in the Premier League table after the opening 12 matches.

Mourinho, who also managed Porto, Real Madrid and Inter Milan, has turned down a number of opportunities to coach abroad, including with clubs in China, Spain and Portugal, since his Old Trafford exit.

His first match in charge will be the London derby away to West Ham on Saturday.

“If Jose wants to get into top-level management, you’ve only got to look at his CV,” he told Sky Sports News. “People question the Manchester United job, but his career as a whole has been hugely successful, and that’s one thing Tottenham have lacked at the moment.

“As well as Pochettino has done, they haven’t quite got over the line to get a trophy, and that’s what Jose Mourinho does when he goes to a club.”

“Is he the right fit for Tottenham? It’s interesting, as Jose likes to spend money, and Daniel doesn’t, and Jose would want to get some really big names into the building,” explained Redknapp.

“He likes experience, and isn’t really one for playing young players, but you can’t argue with what he’s done in the game.”