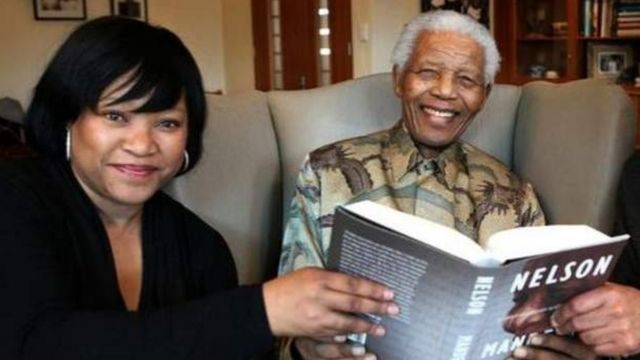 It was tears and grief as thousands of mourners paid tribute to former president late Nelson Mandela’s daughter  Zindzi Mandela, who was buried on Friday in South Africa after succumbing to Coronavirus (COVID-19).

Zindzi, who was Nelson Mandela and Winnie Madikizela-Mandela’s youngest daughter, was buried in the northern Johannesburg suburb, following her death earlier this week.

The 59-year-old was buried in a private ceremony next to her mother, who died in 2018, at a cemetery in Fourways, in northern Johannesburg.

Zindzi Mandela, who was South Africa’s ambassador to Denmark, had tested positive for coronavirus before her death in the early hours of Monday at a hospital in Johannesburg, according to her family.

South African President Cyril Ramaphosa thanked the Mandela family for “the very important gesture of sharing this information with the nation”.

“In doing so you are helping to encourage social acceptance for sufferers,” he said in a eulogy at a virtual memorial on Thursday night.

“This is a virus that affects us all, and there should never be any stigma around people who become infected,” added Ramaphosa.

Zindzi Mandela, an active member of the African National Congress (ANC) youth movement, grew up while her father was imprisoned by the apartheid regime for 27 years.

One of her most prominent moments was in 1985 when she read out – in front of a huge crowd of ANC supporters at Soweto’s Jabulani stadium – a letter in which her father rejected an offer of release from PW Botha, the then apartheid president.

At the time, Botha had offered to free Mandela from prison on condition he renounced the anti-apartheid violence and protests.

“Zindzi has departed this life, but her legacy lives on in our minds and in our hearts. History will record her great contribution and her great sacrifices. And, for these, we shall forever be grateful,” Ramaphosa said.

Julius Malema, a left-wing opposition leader, told public broadcaster SABC at the cemetery: “She survived the most brutal regime at an early age and we thought that this crisis and invisible enemy [coronavirus] we are confronted with today, she is going to survive it because she has seen worse.

“And when people like mama Zindzi succumb to this invisible enemy we all remain hopeless and we are shattered.”

The Nelson Mandela Foundation described her as a “special soul” who “will be remembered for a rich and extraordinary life.” Only two of Mandela’s six children survive.