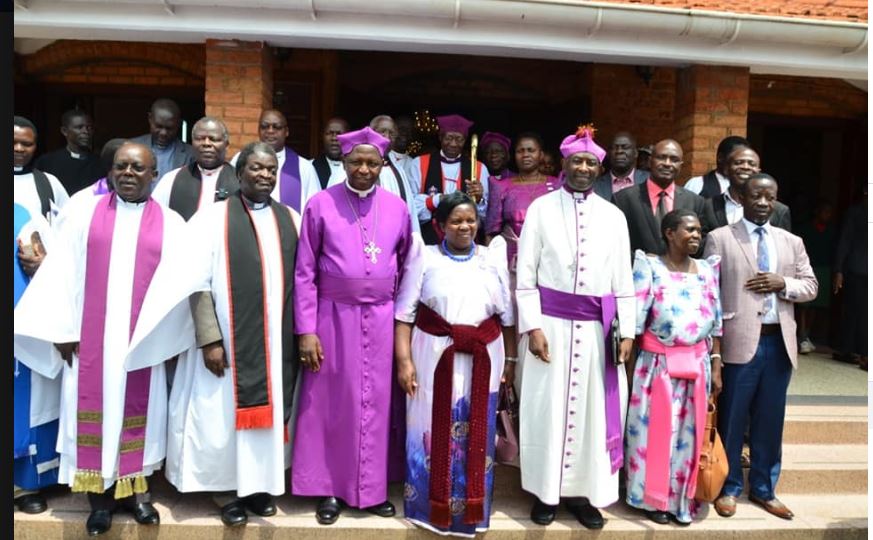 Thousands of Christians on Sunday, March 1, 2020, thronged St. Paul’s Cathedral Namirembe, to witness the enthronement of the Most Rev. Stephen Kaziimba Mugalu, who was enthroned as the 9th Archbishop of the Church of Uganda.

More than 3,000 people attended the colourful ceremony, including His Excellency President Yoweri Museveni and the First Lady Janet Museveni, political leaders, the Nnabagereka Syliva Naginda,  and the Katikkiro of Buganda Charles Peter Mayiga, and other cultural leaders, business leaders, and all the Bishops of the Church of Uganda.

President Museveni commended the Church of Uganda for its growing infrastructure, especially the Janani Luwum Church House. He appreciated the uniqueness of Christianity over African Traditional Religion through the resurrection of Jesus Christ from the dead and the hope of resurrection for those who trust in Jesus Christ.

He also explained that the unconditional forgiveness through Jesus’ death and resurrection is better for Africa than the cycle of revenge that is so much a part of African Traditional Religion.

The Dean of the Province, the Rt. Rev. Jackson Nzerebende of South Rwenzori Diocese, presided over the service of enthronement, per the Constitution and Canons of the Church of Uganda. The Rt. Rev. Henry Luke Orombi, 7th Archbishop of the Church of Uganda, was also present, plus ten Archbishops (Primates) from other Provinces in the Anglican. Chief among them was the Archbishop of Canterbury the Most Right Rev. Justin Portal Welby.

Greetings were brought by Anglican representatives from global regions – The Most Rev. and Rt. Hon. Justin Welby, Archbishop of Canterbury and Primate of All England, brought greetings from England, the UK and Europe.

The Most Rev. Miguel Uchoa, Archbishop of the Anglican Church in Brazil brought greetings from the Americas.

The Most Rev. Laurent Mbanda, Archbishop of Rwanda and Vice-Chair of the Gafcon Primates’ Council, brought greetings from Africa.

The preacher for the service was the Most Rev. Foley Beach, Chairman of the Gafcon Primates’ Council and Archbishop of the Anglican Church in North America.  Preaching from John 20.19-31, Archbishop Beach noted that the first thing the risen Lord Jesus did was to commission his disciples by saying, “As the Father has sent me, so I am sending you.”

Jesus came to us, he said, in Incarnate Love, Servant Love, Sacrificial Love, and Steadfast Love. He concluded that Jesus is commissioning Archbishop Kazimba – and all Christian leaders –  in the same way. As the Father sent Jesus, so Jesus is sending the new Archbishop in this new ministry.

The Most Rev. Stanley Ntagali, retiring Archbishop, handed over the Provincial Staff to Archbishop Kazimba, thus symbolizing the transfer of spiritual authority from one Archbishop to another.  Archbishop Kazimba was then seated in the Primatial Chair at St. Paul’s Cathedral, Namirembe.

Who is Rt Rev Kazimba?

Dr. Kazimba’s calling started with teaching Sunday school children in November 1979 after his confirmation. He later served in Madudu Church of Uganda as a catechist from 1981 to 1983.

He was trained as a Lay-Leader at Baskerville Theological College Ngogwe in 1985 and was posted to Lugazi St. Peter’s Church. Between 1988 and 1990, he trained at Uganda Martyrs’ Seminary and was ordained in December 1990 by Bishop Livingstone Mpalanyi Nkoyoyo. He served as Assistant Vicar at St Apollo Kivebulaya Church of Uganda, Nakibizzi between 1990 and 1994.

In 1996, Dr Kazimba completed his Diploma in Theology at Bishop Tucker Theological; College, and was posted to Katente Parish as Parish Priest from 1997 to 2000. He was transferred to Mukono Cathedral as Vicar in 2,000 and later appointed Acting Provost of Mukono Cathedral by Bishop Michael Ssenyimba.

In 2004, he was confirmed as the provost of St. Philip and Andrew‘s Cathedral before becoming the 4th Bishop of Mityana Diocese on October 26, 2008, replacing Bishop Dr Dunstan Bukenya. [0:54 pm, 01/03/2020] +256 773 654735: Rt Rev Dr Stephen Kazimba Mugalu is scheduled to take over the reins of Church of Uganda (CoU) as the 9th Archbishop today at St. Paul’s Cathedral, Namirembe. His enthronement will be spearheaded by the Dean of the Province of the Church of Uganda, the Rt Rev Jackson Nzerebende.

Rev. Kazimba, the then Bishop of Mityana Diocese was elected Archbishop by the House of Bishops at the Provincial Office of the Church of Uganda at Namirembe in August 2019. He beat top contenders like Bishop Sheldon Mwesigwa of Ankole Diocese and Bishop Samuel George Bogere Egesa of Bukedi Diocese.

The 57-year-old will take the baton from the 8th Archbishop; the Most Rev Stanley Ntagali who is soon clocking 65 years of age, which is the mandatory retirement age for the Archbishop in CoU. The Archbishop can’t serve for more than 10 years.