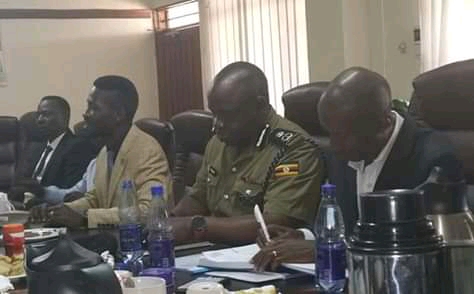 Kyadondo East  Member of Parliament Robert Kyagulanyi aka Bobi Wine has Thursday stormed the Electoral Commission to demand for answers as to why police is blocking his Presidential Consultative meetings.

Riot police and heavily armed UPDF soldiers were deployed at Electoral Commission on Jinja Road after Bobi Wine announced that he would storm the place.

Bobi Wine on Wednesday announced that he would storm the EC to demand an explanation why they set guidelines for his consultations which he was following, but security forces are flouting the same.

“Tomorrow morning, we head to the Electoral Commission’s head offices to demand for answers about the continued blockage of these consultations,” he said.

Bobi Wine said his team is deliberate on exhausting all legal avenues.

“The election cycle has started. We are demanding for a level playing field to take on Mr. Museveni,” he added.

That was after Police frustrated three of his planned consultative meetings including one in his constituency.

Other meetings were due to take place in Gulu and Lira districts.

On Wednesday, Bobi Wine and  number of his team members were forced to abandon their private cars and were bundled up into a police car which drove them at breakneck speed before dumping them at Karuma Bridge between Nwoya District and Kiryandongo.