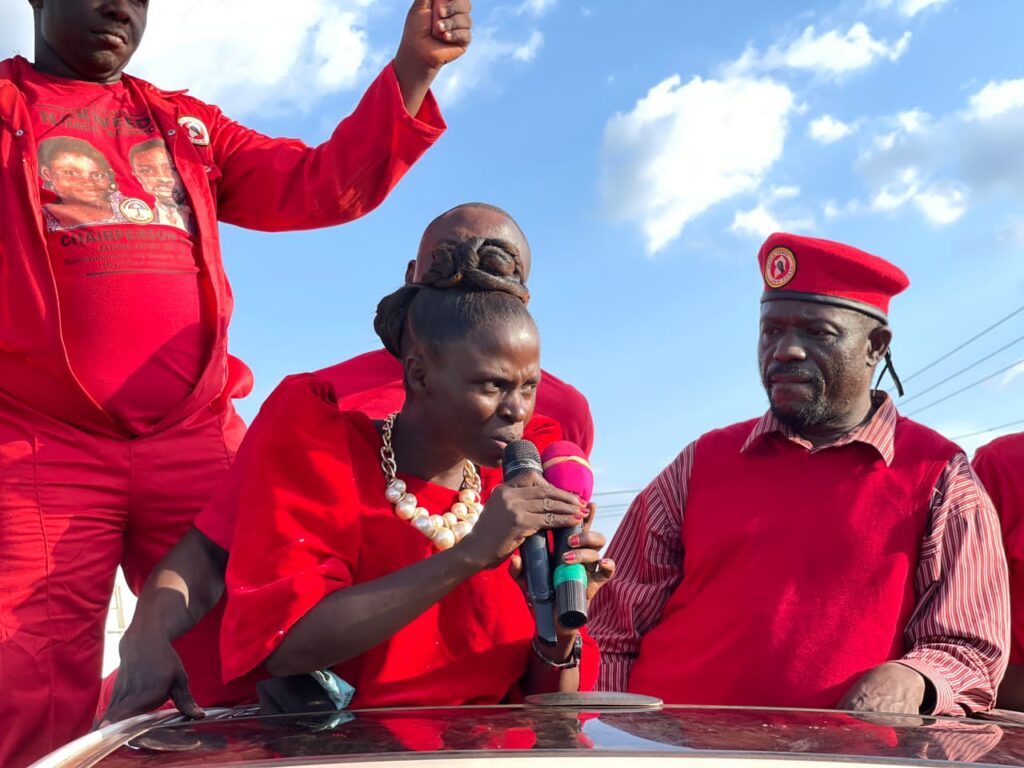 Opposition National Unity Platform candidate in the Kayunga LCV by-election, Harriet Nakweede has been blocked by police from holding her last campaign rally.
According to the harmonized campaign program, Nakweede was supposed to conduct her final campaigns in Kayunga town council. However, by mid-day, the Electoral Commission had stopped her campaigns on grounds that she was planning to host NUP president Robert Kyagulanyi in the same area where President Yoweri Museveni was expected to campaign for the NRM party candidate, Andrew Muwonge.

“The purpose of this letter is, therefore, to inform you that you’re not allowed to carry on with the campaigns in Kayunga town council,” said the EC letter.
The new directive from the Electoral Commission angered NUP supporters who matched on the streets of Kayunga town chanting Kyagulanyi’s name. This forced the police that were accompanied by the army to fire live bullets and teargas.
Nakweede accuses the EC of taking sides with the NRM party officials. She wonders why Museveni decided to visit Kayunga at the time Kyagulanyi was also supposed to be in the district.
“She was saying we can go to another sub-county but our interest now is the people of Kayunga town council because we have been to all these other places and there is no way we’re going to pick the ears of the people of Kayunga town council and maybe place them with the people of other sub-counties,” Nakweede said.
According to the harmonized program, Muwonge, the NRM candidate, was supposed to conduct campaigns at Kayonza sub-county. Museveni was expected to visit the other three sub-counties of Kayonza, Kayunga town council, and Busana.

When contacted, Electoral Commission official Jennifer Kyobutungi declined to explain why Nakweede’s campaigns were stopped. Kyobutungi instead accused Nakweede of declining to turn up when she was invited to review the harmonization program.

“I called honourable and we talked about it and requested her to choose another venue of her choice so that we can provide her with security and leave the town council for the president being the fountain of honor” Kobutungi said.

Meanwhile, security deployed at Kyagulanyi’s home on Monday at 9 pm, blocking him from leaving his home in Magere, Wakiso district to go to Kayunga district to campaign for Nakweede. Security consisting of the armed police and Local Defence Unit (LDU) personnel deployed on Monday evening at all the junctions connecting to Kyagulanyi’s residence.

On Tuesday morning, the police blocked and turned way several people among them journalists and politicians who attempted to access Kyagulanyi’s residence. They said that they were acting on orders from their superiors to stop everyone except neighbors who needed to explain and show proof that they stay in the area.

Kampala Metropolitan deputy police spokesperson, Luke Owoyesigire confirmed the presence of the security in Magere, saying they will only vacate by close of business today once the threat is no more.

Joel Ssenyonyi, the NUP spokesperson said that no one is allowed to access or leave Kyagulanyi’s home and that his security guard and gardener were beaten and arrested before they were whisked away to an unknown place.
“Mr Museveni should stop fooling the world that he exercises democracy in Uganda, why put elections in place if you want to be the only one out there campaigning while blocking your opponents?” he said.