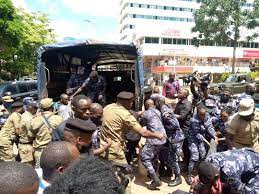 Police in Jinja has fired tear gas and live bullets to disperse angry residents of Mafubira, Namulesa and Buwenge Town Council who were protesting against the skyrocketing commodity prices.

The residents were seen burning car tyres and closed off the Jinja – Kamuli highway among other major trading centres for hours demanding government to come up with ways of reducing the prices.

These blamed their Members of Parliament and government for failing to come up with measures to address their plight hence taking the situation into their own hands.

According to media reports, the police had managed to bring the situation under control, although the situation in Jinja was still tense in some areas, with police patrolling the area.

Speaking to the press, James Mubi, the Kiira region area spokesperson said that they suspect that some people are behind the protests.

Mubi said in an interview that they have footage of individuals distributing materials that were being used in the protests. “Investigations are on and we shall update the public, we suspect that some individuals are behind this…”

Ugandans have for the most part of this year 2022 expressed frustration over the government’s failure to address the issue of skyrocketing prices.

Prices of fuel continue to flare up with a litre now going for over Shs 6000. The same is true for the prices of commodities.

The government has blamed external factors like the Ukraine-Russia war and Covid-19 for inflation.

Political activist and four-time presidential candidate Kizza Besigye last week reaffirmed his call to Ugandans, urging them to fight for themselves because the government does not care about their suffering.