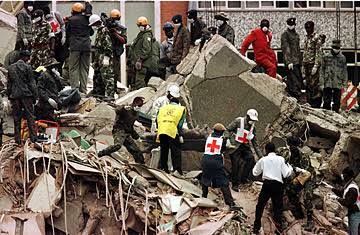 The government of Sudan has pledged compensation for Kenyans and Tanzanians who were affected by the 1998 bombings in both Nairobi and Dar es Salaam.

Sudan’s new prime minister said Monday that his country will soon compensate hundreds of Kenyans and Tanzanians who have been awarded nearly USD6 billion in compensation for the 1998 US embassies bombings in Nairobi and Dar es Salaam.

“We took corporate responsibility on addressing these claims and reaching an agreement on them,” Prime Minister Abdalla Hamdok told the Wall Street Journal in the United States last week.

“A settlement with Kenyan and Tanzanian survivors of some of those killed in the attacks will be reached “definitely in weeks, not months,” Hamdok added.

At issue are payments by Sudan to 570 relatives of US embassy employees or contractors killed in al-Qaeda’s nearly simultaneous attacks on the embassies in Nairobi and Dar es Salaam.

None of the awards ordered by US courts will be available to the thousands of Kenyans and Tanzanians who were harmed by the attacks either directly or indirectly but who were not employed by the embassies or by private companies that did business with the embassies.

A total of 224 people died in the twin bombings — 214 in Nairobi and 10 in Dar. The death toll includes 212 Africans and 12 Americans.
US courts have since held Sudan liable for USD5.9 billion in compensatory damages to the designated groups of survivors because it sheltered al-Qaeda leader Osama bin Laden as he plotted the embassy attacks.