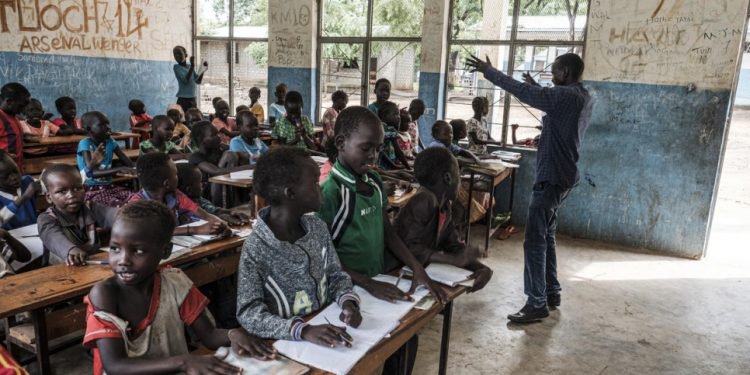 The chorus of children’s voices coming from teacher Koat Reath’s classroom grows louder and louder, threatening to drown out other classes at his primary school in Jewi camp for South Sudanese refugees in western Ethiopia.
The 41-year-old has his pupils on their feet, clapping and reciting the alphabet in Nuer, their native tongue, followed by a few phrases that are sung with gusto in English. He believes children learn better when their lessons are lively and fun.

With almost a decade of teaching under his belt, Koat knows a thing or two about holding young students’ attention – though this can be difficult in Jewi where more than 100 children are crammed into one classroom at any time. Luckily, his energy levels easily match those of the five- to 15-year-olds in his class.

“I use song so that they have fun and don’t feel bored.”

“As you can see these are children. Teaching children is not easy. I use song so that they have fun and don’t feel bored … That’s the way I get my message across,” said Koat, whose sometimes stern face belies his warmth and enthusiasm for education.

Koat has spent the summer break providing extra classes to his students under an initiative by Plan International and other partners of the UN Refugee Agency, UNHCR to help children catch up on schooling they missed because of fighting in South Sudan.

The father of five shares much more than a love of learning with his young pupils.

Like them, Koat is also a victim of a war that has made refugees of more than two million South Sudanese.

He and his family fled to Ethiopia in 2015 after their home in Jonglei state was burned to the ground.

South Sudan’s conflict has had a particularly devastating impact on children. In Jewi camp, which is home to 54,000 South Sudanese refugees, as many as two-thirds are children.

Not only have they lost their homes and seen their relatives killed, but years of violence have also prevented them from having and education. Some never had a chance to go to school in the first place and many who did have dropped out altogether.

Painfully aware of the disadvantage the children face, Koat and his colleagues are determined to do what they can to help close an education gap which means that only two-thirds of South Sudanese children in Ethiopia have access to primary school. In addition, the vast majority – 86 per cent — do not and cannot continue on to secondary school.