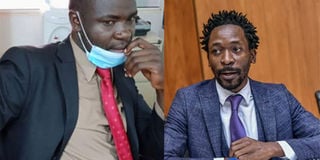 Mabirizi was arrested last evening from Kyambogo and sent to Kitalya Prison for alleged contempt of court.

Today, he was not brought to court for the application hearing.

Ssemakadde told court that the arrest of Mabirizi pending his appeal was a violation of his constitutional rights since he is a law abiding person who explored all the legal channels available to have his freedom protected by law.

“Everything complained of by Mabirizi in this application can be set aside or overturned by this court. Under the law, this court is empowered to issue an order of stay in matters of this nature after getting satisfied with the submissions brought before it.” He said.

Ssemakadde submitted that he had no problem with his client serving a year or beyond in jail provided that he has been fully heard and his constitutional rights have not been violated in the process.

The representative of the Attorney General Patricia Mutesi asked court to dismiss the application because it has been overtaken by events since Mabirizi was arrested and already serving his sentence.

“As we speak there is a valid court order to that effect which sentenced him (Mabirizi) to 18 months’ imprisonment, unless it is set aside by a superior court, it still stands.”

She also pointed out that the applications before Court of Appeal are misconceived since one is seeking civil remedy in respect of the sentence which resulted from a criminal offence of contempt of court.

“Contempt court is a peculiar offence which doesn’t require a charge sheet, formal proceedings. In the instant matter the applicant can apply for bail pending hearing of his appeal rather than seeking stay of implementation of court orders.”

Ssemakadde while responding to the above submissions pointed out that criminal offences are always accompanied with a charge sheet which was not done in this matter and thus asked court not to be misled by the Attorney General by turning the civil case into criminal.

“We pray that this court looks into this matter with a constitutional lense, not a Common law lens.” He added

Mabirizi was ordered to pay a fine of 300 million shillings, and was later sentenced to 18 months in jail.