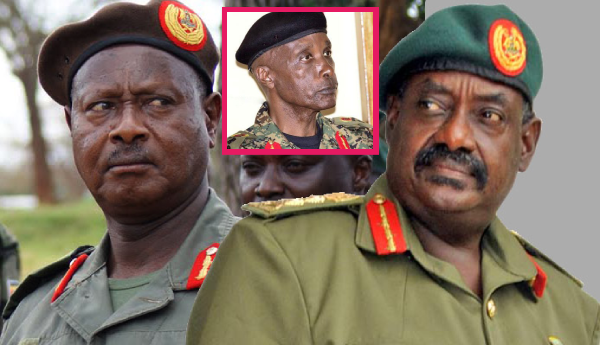 President Museveni,Kayihura and Gen.Sejusa.
The UPDF has finally allowed former spymaster Gen David Sejusa to retire and is among the set of 50 generals of the UPDF who are officially being relieved of active service of the Ugandan army today.
According to the list released by the UPDF, Gen Sejusa whose force number is RO00031 is number two on the list of the army general officers retiring from active service today during a function currently going on at State House in Entebbe and presided over by the commander in chief of the armed force, President Museveni.
It is however not clear in regards his retirement package since he has not been receiving salary from the UPDF since 2013 when he fell out with government and consequently fled the country into exile after penning the famous dossier about the ‘Muhoozi Project’.
He would later return to the country.
Sejusa would later drag government to court for refusal to pay his emoluments but at the same time not retiring him from active service of the army.
Others UPDF generals on today’s retirement list include Lt Gen John Mugume, Lt Gen Proscovia Nalweyiso,Lt Gen Andrew Gutti, Maj Gen Stephen Kashaka, Maj Gen Phinehas Katirima, Maj Gen Elly Kayanja, Maj Gen Michael Ondoga, Maj Gen Gavas Mugyenyi, Brig Rebecca Mpagi and Brig Stephen Kwiringira among the notable ones.
The list also has former Security Minister, Gen Elly Tumwine who died last week of lung cancer having been admitted at Aga Khan University in Nairobi and was buried yesterday.
By the time of his death, Gen Tumwine was left with less than a week to officially be retired from the army and according to his close pals, he was looking forward to the ceremony , having served the army diligently for over 30 years