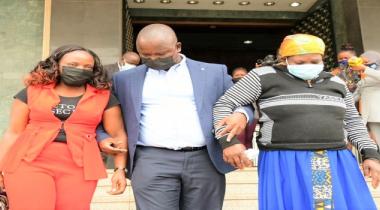 Security at the Ministry of Justice and Constitutional Affairs this morning blocked the mother of Kawempe North Member of Parliament, Muhammad Ssegirinya and his wife from meeting the Minister.
Justine Nakajumba wanted to meet Minister Nobert Mao to express her disappointment in the justice system.
However, she was told to return tomorrow if they are to meet the Minister.
For a long time, Nakajumba, has been asking the state and pardon her son who has been in prison on separate charges of murder, attempted murder, aiding and abetting terrorism in connection a recent spate of killings in Masaka sub region which claimed close to 30 lives.
He and his Makindye East counterpart Allan Ssewanyana remain confined at Kitalya prisons.