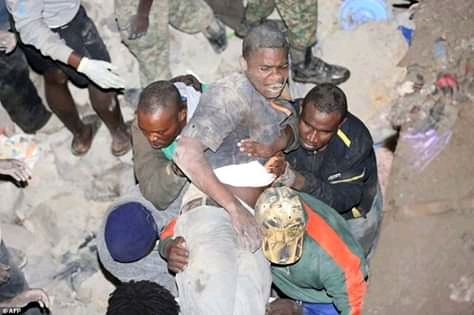 Two people have been confirmed and several others injured after six-storey residential flat collapsed today in Kenyan capital Nairobi.
A rescue operation is currently ongoing in the Kenyan capital to pull some of the survivors from the debris. Two people were confirmed dead and an unknown number are feared to be trapped under the rubble despite rescue efforts.

Residents of the Tassia estate where the incident happened were first at the scene of the incident and rescued ten people, according to Nairobi county police chief Philip Ndolo.
They used their bare hands to dig out the survivors.

Military personnel and emergency services have since arrived at the site, far on the eastern outskirts of the capital, to assist with the search and rescue operation.

The Kenya Red Cross tweeted that it was setting up psychosocial support services and a tracing desk.
However, the number of people trapped is still unknown
Nairobi regional commissioner Wilson Njenga said that 57 rooms had been rented out in the building, and the Red Cross reported that 22 families lived there.

The building’s owner was “not available” said Njenga and did not live in the building.
DW correspondent in Nairobi, Edith Kimani, said the collapse took place in the early morning when people were sleeping.

“We do not have a figure yet,” Peter Abwao, Kenya Red Cross communications manager, told dpa news agency, on how many people could be trapped in the collapsed building.

St. John Ambulance Kenya, which is also part of the rescue effort, tweeted “at least five people including a child evacuated to hospital. Rescue operations ongoing.”
‘
Kimani called the collapse a “desperate situation,” adding that recent heavy rains had made the rescue effort more difficult because it had stretched resources and made the site less accessible.

Kimani also said that many people from the area had headed to the site to try and “catch a glimpse of what is happening” and this was also obstructing the rescue effort.

It was not immediately clear what caused the accident, but building collapses are common in Nairobi, where housing is in high demand and regulations are not enforced.

A recent survey conducted by Kenya’s National Construction Authority found that 58% of the city’s buildings were unfit for habitation.