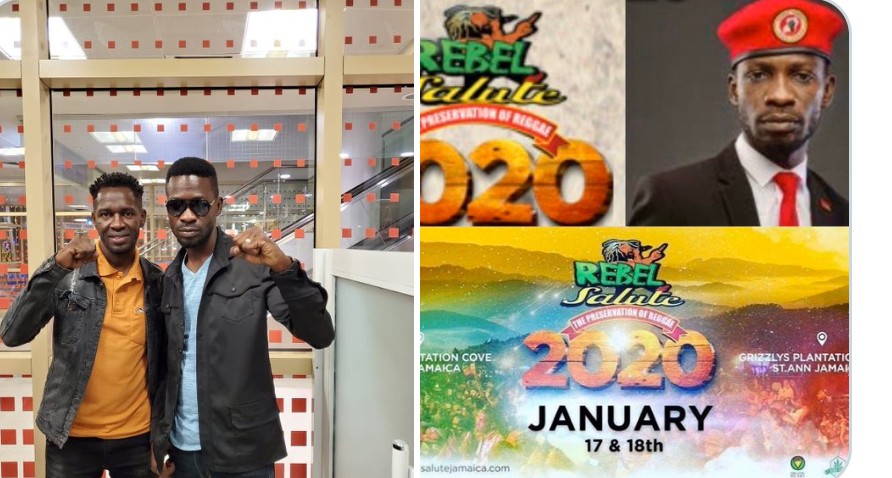 By Keefa Nuwahereza
Kyadondo East Member of Parliament Robert Kyagulanyi aka Bobi Wine, the leader of the People Power movement, is in Kingston, Jamaica, where he travelled to perform at the Rebel Salute reggae festival 2020.

Bobi Wine, who performed at the same festival last year, traveled with his close friend Nubian Lee, to grace the Rebel Salute 2020 stage next week, after being banned from performing in Uganda, his own country.

The 36-year-old, self-styled Ghetto Gladiator made a big impression when he performed at Rebel Salute in January 2019.
Bobi Wine was never overawed by the occasion, and performed with a confidence that went over well with the audience at Rebel Salute 2019, at the Grizzly’s Plantation Cove in St Ann, Jamaica.

Along with members of his People Power crew, Bobi was adorned in a red beret and all the time appeared in a militant mood.
During his performance, he took time to lash out against the Kampala regime which he claimed was oppressing the people of Uganda.
He claimed he was being framed by the government officials who he said arrested him after planting two high-powered assault rifles in a hotel room he occupied.

During his performance, he is quoted to have said, “After being poor, and by 22 owning beachfront property, I thought I had achieved something. But when I looked back and saw all of my childhood friends living in poverty, I realised that I had to use my music to uplift the people. As a child growing up, I watched videos of Sting, Sunsplash and, most importantly, Rebel Salute. Those videos inspired me to use my music to uplift my people.”

After humming the melody to the Punany rhythm, the chanter stopped midway his delivery and he praised the music of Jamaica for opening his eyes and mind, and those of a wide cross section of Africans who looked to the Caribbean island’s music for inspiration.
“It is your music that opened many eyes. Keep your eyes and minds on Africa,” he said.
He explained how he got his stage name, Bobi Wine, after being teased by Rebel Salute Master of Ceremonies Mutabaruka.
“In school, they called me “Bobi” and then they started calling me “Wine” because, as I got older, I got better,” he said.
His followers both in Uganda and Jamaica have heaped praises on Tony Rebel, the promoter of the event, for giving the artiste the opportunity to use Rebel Salute as a platform for pursuing reform in his country and, according to them, get ‘dictatorship’ out of Uganda in 2021 when elections are due