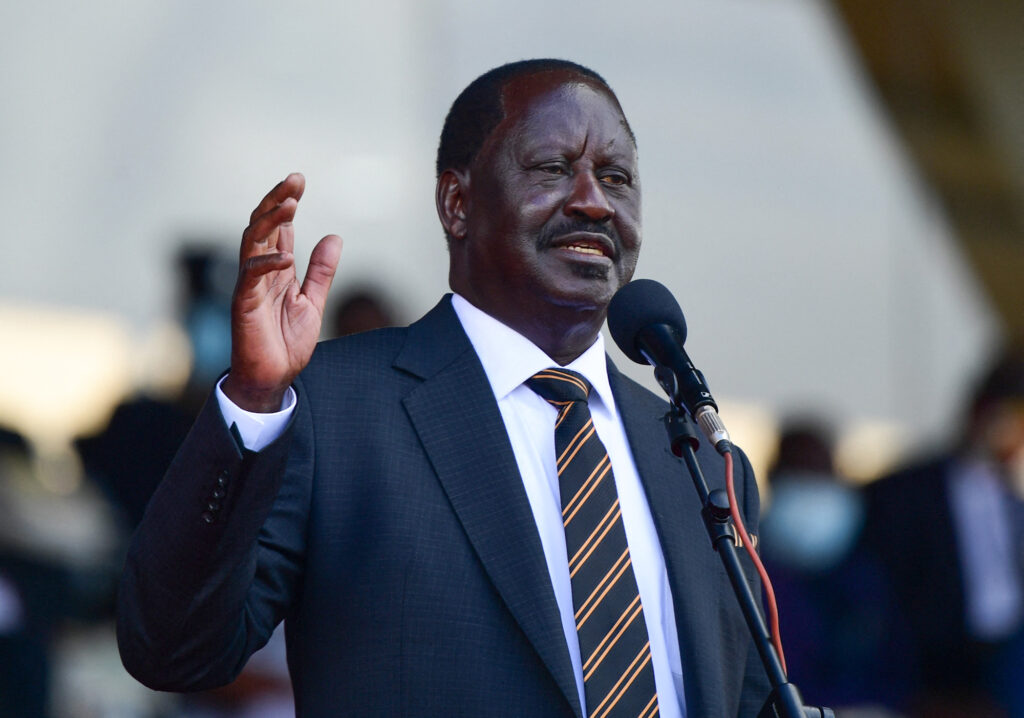 He was born at the Anglican Church Missionary Society Hospital in Maseno, Kisumu District, Nyanza Province on 7 January 1945 to Mary Juma Odinga and Jaramogi Oginga Odinga. His father served as the first Vice President of Kenya under President Jomo Kenyatta. He is a member of the Luo ethnic group. He went to Kisumu Union Primary and Maranda High School where he studied until 1962, when he was transferred by his father to Germany.
East Germany
He spent the next two years at the Herder Institution, which trained foreign students in the German language and was part of the philological faculty at the University of Leipzig in East Germany. He received a scholarship that in 1965 sent him to the Technische Hochschule (technical college) of Magdeburg (now a part of Otto von Guericke University Magdeburg) in the GDR. In 1970, he graduated with a Diplom (roughly equivalent to a master’s degree) in Mechanical Engineering and Welding. While studying in East Germany during the Cold War as a Kenyan he was able to visit West Berlin through the Checkpoint Charlie. When visiting West Berlin, he used to smuggle goods not available in East Berlin and bring them to his friends in East Germany.
Career
Business and entrepreneurship
Odinga returned to Kenya in 1970 and in 1971 he founded the Standard Processing Equipment Construction & Erection Ltd (later renamed East African Spectre), the only company manufacturing liquid petroleum gas cylinders in Kenya.
Civil service career
In 1974, Odinga was appointed group standards manager of the Kenya Bureau of Standards. After holding this position for 4 years, he was promoted to be the deputy director in 1978, a post he held until his 1982 detention.
Political career
1982 Kenyan coup attempt
At 3am on Sunday, 1 August 1982, a group of soldiers from the Kenya Air Force led by Senior Private Hezekiah Ochuka attempted to overthrow the government of then president Daniel Arap Moi. After the failed attempt to overthrow him, President Moi re-organized Kenya’s security architecture, staffing it with his loyalists and then he ensured a law was passed in parliament that gave him emergency powers while placing the provincial administration under the office of the president.
Odinga was arrested and charged with treason after being accused of being among the masterminds of the 1982 coup. He was released six years later in February 1988 but detained again in August of the same year to be released in June 1989.
Detention
In an era of unrelenting human rights abuse by the Kenyan government, Odinga was placed under house arrest for seven months after evidence seemed to implicate him along with his late father Oginga Odinga for collaborating with the plotters of a failed coup attempt against President Daniel Arap Moi in 1982. Hundreds of Kenyan civilians and thousands of rebel soldiers died in the coup. Several foreigners also died. Odinga was later charged with treason and detained without trial for six years.
A biography released 14 years later in July 2006, apparently with Odinga’s approval, indicated that Odinga was far more involved in the attempted coup than he had previously admitted. After its publication, some Members of Parliament in Kenya called for Odinga to be arrested and charged