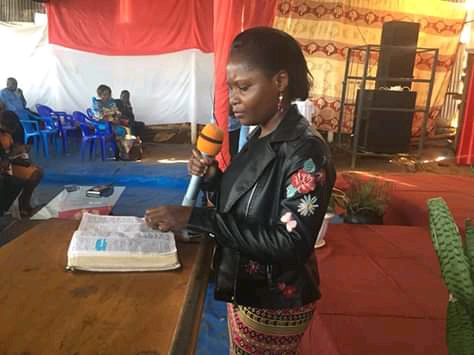 A prominent Ugandan LGBT activist renounced her former lesbian lifestyle, adopted Christianity and now declares that homosexuality is a sin.

Val Kalende, a then noted Uganda activist for LGBT people in 2003 helped launch freedom and Roam Uganda, the only lesbian organisation in Uganda. It was the leadership of sexual minorities Uganda chapter. She had played a key role as a writer, speaker, activist, community organiser, and builder with in the Lesbian Gay Bisexual and Transgender (LGBT) movement in Uganda.

Val Kalende travelled to the united states at the invitation of the U.S Department of state to attend the International Visitor Leadership Programme, an exchange tour on which she addressed LGBT issues in her country and the role of U.S right- wing evangelicals in sponsoring homophobia in Africa.

She was granted asylum in Canada in 2015 after the passing of the Anti-Homosexuality Act. While appearing on NTV’s Tuwaye hosted by Frank Walusimbi, she expressed that she received an epiphany that forced her to realise she was living a lie.

Kalende formerly served as a reporter for the Ugandan Newspaper Daily Monitor before she left the job to focus on LGBT activism in 2007.

She became actively involved in a group called the Sexual Minorities of Uganda and took trips to the U.S. to visit with various LGBT groups during the presidency of Barack Obama. She also spoke at international conferences advocating for LGBT rights.

But now, she says, she has been “saved.” She declared that she is no longer a lesbian and is going to be married soon.

“It happened about two year ago, it’s just that I’ve taken very cautious steps. By the time I went public about it, I was ready,” Kalende told the NTV Tuwaye moderator. “I wanted to take time to do the important work on myself before making a public confession. I was told by my pastor to shun the media for some time. And that’s why I have been declining to come for your interview”

In her televised confession, Kalende explained that she comes from a Christian family in Kyebando and “joined lesbianism” after her study at Makerere University.

“I’m born of Christian parents. All of them cut their ties with me for being gay. I became an orphan,” Kalande said, in an earlier monitor interview.

Kalende said that she was lured by Satan.

“I became rebellious. We always wondered why the world forced us to become girls who do not love men,” she was quoted as saying. “We were even arrested from a conference and detained. We were detained at Central Police Station and even taken to court.”

With Toxic Leaders, Your Church’s Mission Is On the Line

Kalende went on to say that “Let’s be honest: People don’t go into ministry for the money. And the ones who do (typically) don’t make it. It’s just too much work. The demands are constant, and the hours are long. People go into ministry because they are called. They understand the need of the mission and their place in it.”

She added that “Right now, I have no peace of mind. I sometimes break down and cry wondering why am like this,” she added. “I’m now back home and have been saved.”

Kalende also posted about her transformation on her Facebook page, asking the question “what went wrong?”

“How is it possible that this girl — raised in church, taught the way of God — could swing too far from the way she was brought up? I wrestled with this question for many years. I didn’t have answers. My rebellion had separated me from God,” she wrote.

“Often times I read my Bible — particularly scripture on homosexuality and marriage — but my heart was hardened. Instead I asked God questions like: If your design is for me not to have sexual relations outside of marriage and for marriage to be between a man and a woman, why then do I have same-sex attractions?”

Kalende stated that now she understands that she should have had a different “approach” in her conversation with God.

“My approach should have been: Lord, I don’t have answers but I trust and believe your Word,” she continued. “Your intention is not to harm me or prevent me from enjoying life. Your intention is to preserve me; and to give me not the life of my choice but the life I deserve according to your love. Help me to obey your purpose for my life.”

Kalende said that the “enemy had a plan to divert and eventually destroy” her identity.

“God had a plan. A good plan. For I wasn’t just an ordinary lesbian woman and gay activist. I was a mentor, leader and scholar,” she wrote.

“My contributions to the gay movement (though I think of them with deep regret) were not small. Seeing how far God has brought me it makes sense now to believe God had His eyes on me. He waited on me. He preserved my womanhood. He never stopped loving me. He knew me by name. He never stopped calling me back to His purpose.”

“What kind of LOVE is this! That God would bring out someone so lost like me,” she added. “I may not have all the answers but one thing is true. I am LOVED.”

Ultimately, Kalende stated that the “victory belongs to Jesus.”

“I’m thankful to God for my family. This is exactly what I prayed for on that Toronto-Entebbe flight three months ago. That my relatives (close family) would receive me with the love I once knew; that I would get their blessing,” she wrote in another Facebook post.

Kalende’s testimony has caught the attention of activists on both sides of the LGBT debate.

“Val Kalende is an incredible example that Jesus Christ can change the heart of even those who have acted adamantly against Him,” Mat Staver, founder and chairman of the U.S.-based religious freedom law group Liberty Counsel, said in a statement shared with The Christian Post. “

Ms. Kalende’s testimony is like Saul’s conversion from persecuting Christians to then giving his heart and life to God and becoming Paul. Despite those who want to deny reality, people can and do change.”

Frank Mugisha, the executive director of Sexual Minorities Uganda, told the Daily Monitor that he respected Kalende’s personal decision but stressed that it could “psychologically” impact members of the LGBT community who are being persecuted in Uganda.

“She has been a very strong and vocal member of the community. This decision will psychologically affect many members who may feel threatened,” he argued. “However, I am happy that she is not attacking the community and she has demystified the notion that people are being paid to join the community.”