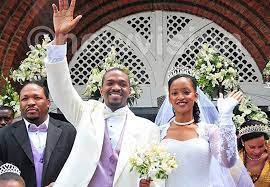 Grief and shock has engulfed Tooro Kingdom as it’s gorgeous princess Ruth Komuntale Nsemeere lost her ex-husband Christopher Thomas, Christopher met his demise on January 9 in the US where he was staying. The sad news was announced by his Sister Cretia Thomas, on Tuesday morning.

“In 2021 I lost 7 Family Members. Including My Son Jaylin. I’m Trying to be strong after that. Now on January 9, 2022 I have lost my brother Thomas… Lord, I haven’t healed my son. Please give me strength. I just had my last conversation with him,” Cretia posted.
Komuntale got married to Christopher, an African American, at a royal wedding in November 2012, but their marriage ended in a bitter divorce a year later. Both Komuntale and Christopher declined to reveal immediately why they had separated. However, shortly after, Thomas apologised to Komuntale, Toro Kingdom and Ugandans over the marriage that went sour. Christopher posted on his Facebook page acknowledging that he had made grave mistakes in his marriage, but sought forgiveness from his wife. Komuntale then broke her silence in October 2013, a week after Christopher’s apology. She confirmed that their marriage had ended. In the post, accusing Thomas of being physically abusive.
In 2021 Tooro Kingdom got a new Duke Anthony Phillip, who secretly wed Princess Ruth Komuntale.