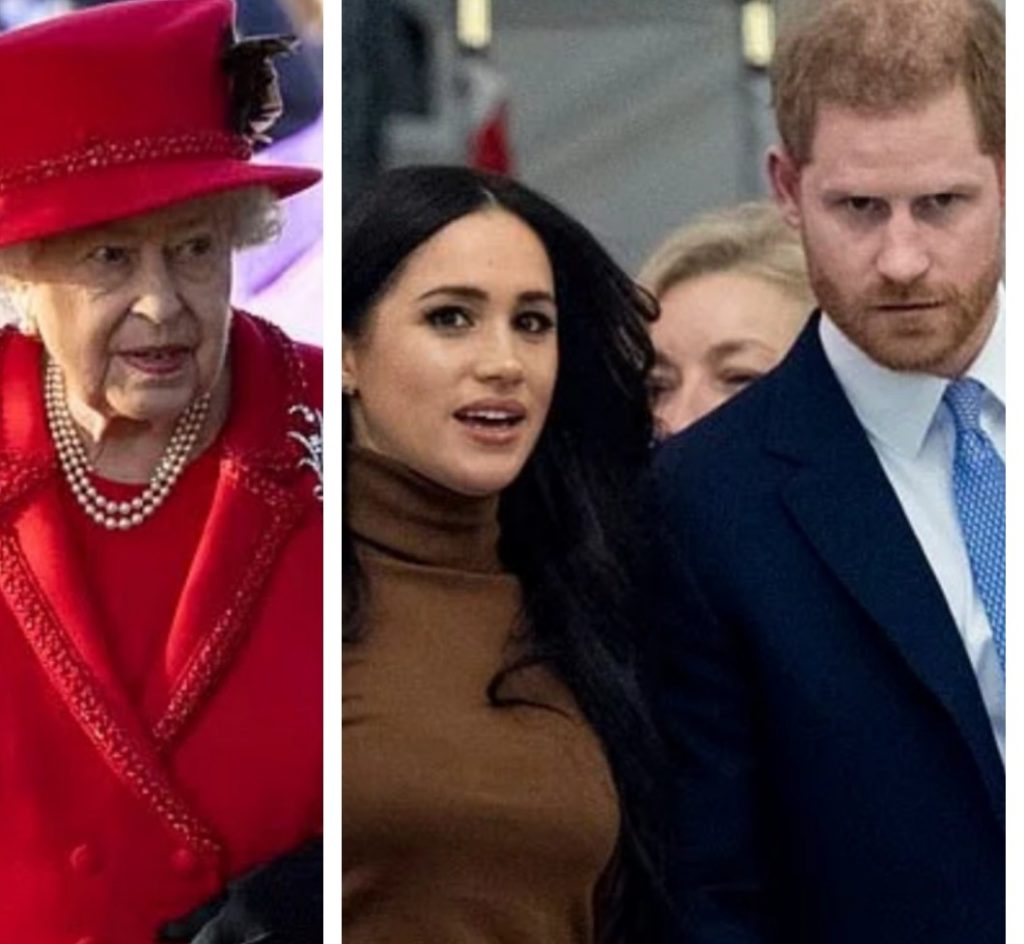 By Keefa Nuwahereza
The British palace is in shambles after Prince Harry and his Duchess Meghan Markle fled Britain to Canada, following allegations of racism and hatred against her from the Royal family.

According to insiders,  Prince Harry will follow Meghan Markle to Canada as soon as possible after she fled across the Atlantic to be with their son Archie, having left him with their nanny and her best friend following their Christmas break. Some sources allege that Harry fears Meghan might be murdered by some members of the Royal Family who hate her, the way his late mother Princess Diana  was murdered.

The couple want to spend more time together in North America in a move that has ‘simply astonished’ aides as the Queen, Prince Charles and Prince William called crisis talks to hammer out a deal to keep them in the royal family.

The Duke and Duchess of Sussex are understood to have left Archie in Canada after their six-week trip and the eight-month-old is being cared for by their nanny and Meghan’s best friend, Jessica Mulroney. Ms Mulroney lives in Toronto but it is not known if she was with them in the £10million waterfront mansion in Vancouver they occupied between Thanksgiving and the new year.
Meghan flew from London to Canada in the hours after the Sussexes shocked the world and quit as senior royals.

The couple horrified and shocked Harry’s family including the ‘hurt and furious’ Queen, who had begged them to delay announcing their ‘nuclear’ plans. Prince Charles and Prince William only got a copy of the statement ten minutes before it went live on their secretly developed website.

On Friday night Her Majesty held a series of calls involving herself at Sandringham, Charles at his Scottish home Birkhall, William at Kensington Palace and Harry – without Meghan – at Frogmore Cottage.

But as the abdication crisis rumbled on the Duke of Sussex was also plotting to fly out of Britain, it has emerged, although it is not yet confirmed when he intends to join his wife in Canada.

Meghan may stay there for the foreseeable future and Harry will not be apart from his wife and son for long – but he must also be at Buckingham Palace for an engagement next Thursday.

On the day of behind-the-scenes drama, the monarch convened an extraordinary series of calls between herself, the Prince of Wales, Prince William and Harry.

She told them to come up with a ‘workable solution’ to the crisis within days, and tasked aides with presenting a series of options to put to the unhappy couple.
Insiders last night predicted that Harry, 35, and Meghan, 38, would be allowed to keep their royal titles and also enjoy a measure of the independence they have demanded.
But they added that the couple’s string of demands had sparked a genuine crisis which will not be easy to solve.

As a sign of how serious and sensitive the issue has become, Home Secretary Priti Patel has been asked to take part in the negotiations.
She will be tasked with ensuring the couple’s ongoing security is not compromised, but she also has to monitor the cost to taxpayers if they split their lives between the UK and North America.

The Duke and Duchess of Sussex are likely to keep their Royal titles despite stepping away from official duties in their bid to become ‘financially independent’.

Prince Harry and Meghan Markle on Wednesday released a statement which detailed their plans to split their time between the UK and North America, while also giving up their share of the Sovereign Grant.
At the end of the statement, the couple signed off as ‘Their Royal Highnesses, The Duke and Duchess of Sussex’.

It comes as many expressed that the pair should be stripped of their titles if they remove themselves from completing Royal duties on behalf of the Queen.

The couple have licensed ‘Sussex Royal’ across their social media platforms, which means they aren’t in a hurry to get rid of their Royal status.
Speaking last night insiders said the couple would be allowed to keep their titles while still enjoying a level of independence never before seen in the Royal family.

Sources said that nothing was set in stone but that lessons had been learnt from the past, and despite the late Princess Diana of Wales giving up her HRH title, people still blamed the Royal Family for that decision.

But Diana wasn’t the only Royal to have lost her title, because Prince Andrew’s ex-wife Sarah, lost her title after the couple  divorced in 1996 – as did Diana when she split from Charles.
An expert on British royalty said the Queen has the ability to strip the Sussexes of the title.

Although the Queen, Charles and William had been told of their plans a week earlier, the couple ‘detonated the nuclear button’ by announcing their intention and launching a glossy new website without warning anyone.
In a terse statement in response, Buckingham Palace made clear its displeasure.

It said it understood the couple’s desire to do things ‘different’ but stressed these were complicated matters that needed to be worked through carefully.

Senior royal aides made clear the Queen was deeply hurt by her grandson’s actions, while other family members had reacted furiously to Harry and Meghan’s arrogance. However, it is suspected Prince Charles could pull funding from his son Prince Harry and Meghan if they go ahead with their plans to step away from royal duties.

The Duke and Duchess of Sussex this week said they wanted to become ‘financially independent’ and claimed they would stop receiving money from the Sovereign Grant.
But sources close to the Prince of Wales claimed he could stop Harry’s £2.3 million hand out from the Duchy of Cornwall Estate.

The news that Charles is not prepared to continue to bankroll his son comes as a YouGov poll suggested that over two thirds of people believed the couple should no longer receive funding from the Duchy.

Speaking to the media, a source said that Prince Charles ‘had made clear that he will not be writing his son a blank cheque’.