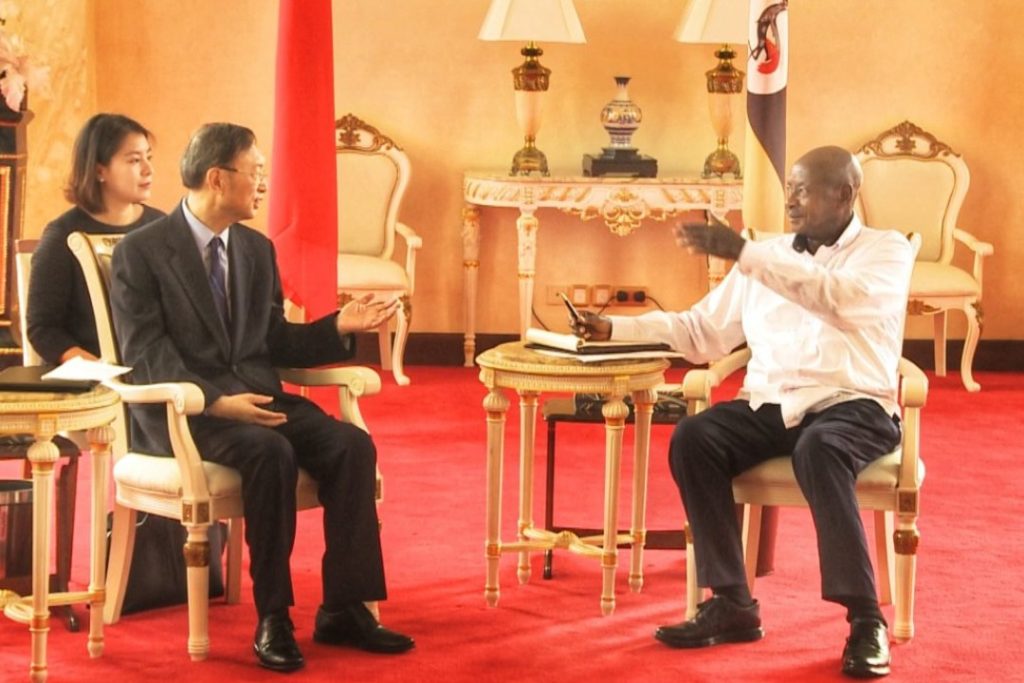 President Yoweri Kaguta Museveni on Wednesday held a private meeting with a group of investors from China, led by Yang Jiechi, a Senior Leader in the Chinese government.

Yang Jiechi, a member of the Political Bureau of the Communist Party of China (CPC) Central Committee, met with Ugandan President Yoweri Museveni on Wednesday at State House, Entebbe.

Yang, also director of the Office of the Foreign Affairs Commission of the CPC Central Committee, said that guided by Chinese President Xi Jinping and Museveni, the China Uganda relationship has upgraded to a comprehensive cooperative partnership and entered the best period in history.

The two countries have seen fruitful results in practical cooperation and enjoyed ever deepening friendship and mutual trust, Yang said during his meeting with Museveni at State House Entebbe, 40 km south of the Ugandan capital of Kampala.

He said that the two countries have demonstrated mutual understanding and support for each other on issues concerning their respective core interests and major concerns, and work closely in international and regional affairs.

China is willing to work with Uganda to implement the important consensus reached by the two heads of state and the outcomes of the Beijing Summit of the Forum on China-Africa Cooperation, deepen cooperation in such fields as economy and trade, production capacity,
industrial parks and infrastructure, strengthen exchanges on governance experience so as to continue to enrich their bilateral relations, he said.

For his part, Museveni said he has worked together with Xi to upgrade the China-Uganda relationship to a comprehensive cooperative partnership and lift bilateral relations to a new level.

The awakened African continent now needs to strengthen itself and promote integration, and Uganda is moving towards industrialization and modernization, said Museveni, adding that China’s support, experience and market would be indispensable to realize goals on bothlevels.

Uganda is willing to work with China to expand practical cooperation in a wide range of areas and push for greater development of bilateral ties, he said.

During the meeting, the two sides said they will promote the synergy between the joint construction of the Belt and Road and Uganda’s national development plan “Uganda Vision 2040,” so as to achieve common development and better benefit the two peoples.