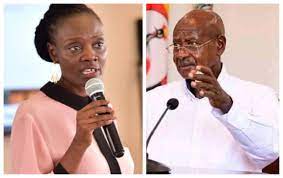 President Yoweri Museveni ordered the appointment of Jennifer Bamuturaki as the substantive chief executive officer of Uganda Airlines.
In a letter dated April 24, 2022, Museveni made the directive on her appointment to Gen Katumba Wamala, the minister of Works and Transport. Katumba then wrote to Priscilla Mirembe Serukka, the chairperson of the board of directors of the airline to implement the presidential directive. Katumba authored the letter on July 5.
Since it started operating commercial flights in 2019, the (revived) Uganda National Airlines Company Ltd, trading as Uganda Airlines has been managed by Ephraim Bagenda, Cornwell Muleya and Bamuturaki. All three however have been acting CEOs.
Bamuturaki was fired at the end of her six-months’ probation back in March 2020 amidst a swirl of allegations including hiring a media and PR firm, Abbavator Ltd where she had direct interests, to manage the PR and communications for the airline and subsequently over-invoicing the airline by over $232,000.
She was also accused as then second in command of approving payments of over $404,000 yet the actual cost was $172,000. Abbavator was also accused of failure to eventually comply with contractual obligations by not paying several media houses and eventually engaging in negative publicity against Uganda Airlines, whose image it was meant to protect.
Bamuturaki was also accused of of using her position to establish external air stations on routes of Nairobi, Mombasa, Mogadishu, Mombasa, Dr es Salaam and Kirimanjaro. She somehow skirted around the allegations and bounced back at the airline in May 2021 as acting CEO, replacing Muleya after he and 12 other top airline officials were suspended on corruption and mismanagement allegations on the urging of Museveni.
Bagenda, currently the director of engineering and maintenance at the airline was appointed acting CEO from January 2018 to October 2019 and was replaced by Muleya whose contract was terminated in February this year over allegations of financial mismanagement, collusion, and nepotism in staff recruitment.
Bamuturaki now becomes the first substantive CEO of the national carrier. When our reporter called Bamuturaki about the appointment, she was upbeat about the news and pledged to give a more detailed response after attending a meeting she was chairing on Wednesday evening.
Bamuturaki has worked in the aviation and hospitality sectors for ten years including as the commercial director at Uganda Airlines. She also worked previously at Air Uganda and other start-up airlines and hotels.
The airline is being marketed as Uganda’s flagship national passenger and cargo carrier, having been set up to enhance Uganda’s competitiveness by reducing the cost of air transport and easing connectivity to and from Uganda, to support faster harnessing of opportunities in main tourism, agriculture, oil and gas and minerals.
The airline currently operates flights to ten regional destinations namely Johannesburg, Juba, Nairobi and Kinshasa and one international route; Dubai. It is expected to expand this network before the end of the year to include London and Guangzhou.