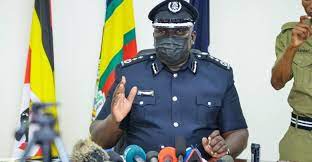 Police in Kabalagala have arrested Oliver Nakaziba for running an online sex and pornographic internet site.

Nakaziba is said to have been running the online site in disguised names of “Online Module Centre”. The site is believed to have been one of the most active pornographic platforms in town.
Also arrested are 4 female staff who include; Ester Wainawalo, aged 18, Patricia Matovu, 18, Mackline Katusiime 20, and Rita Atim aged 25.

According to the police spokesperson Fred Enanga, the arrests came after task teams at Kabalagala Police Station received information that Nakaziba rented an apartment where she had been luring young teenage girls and young female adults,
She is alleged to have been exposing the young girls’ nudity online in exchange for money.

“She allowed users to log into a given account with a client while in private bedroom.” Enanga said.

Enanga further noted that five CPUs, were recovered and are being processed by the Cyber Forensics Unit for digital evidence of either Child pornography and other pornographic materials. Also recovered includes sexual paraphernalia.

Following Nakaziba’s arrest, the police mouthpiece warned all sex traffickers and those running pornographic Internet sites to stop saying it is a crime which is punishable under the law.

“We wish to warn all sex traffickers and other illegal proprietors of pornography sites, including Child Pornography, against live streaming videos of child sexual abuse and exploitation of children.” he warned.