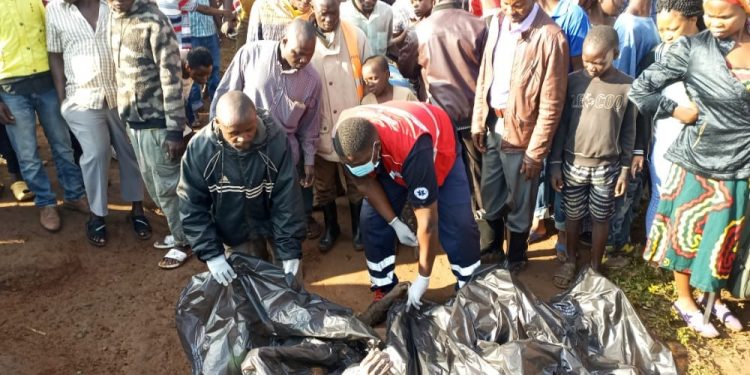 Police in Elgon in Mbale district have released the bodies of the victims who died in the July 30th floods to their respective relatives for proper burial after postmortem.
The floods which affected the people at the slopes of Mt Elgon were caused by the outburst of river Nabuyonga.
At least 29 people were confirmed dead and their bodies were retrieved and taken for postmortem.
On Wednesday, the regional police released the names of the deceased, how the victims died and where they will be buried.
From the list, police said that they retrieved the body of Lukia Khalayi,a female juvenile who has been a P7 Pupil and Barbra Khalayi, P3 both daughters to a one Sam Simiyu at North Road P/S – Mbale City.
The other was Doreen Tamunoza Doreen, who was a hairdresser operating from south central ward, Industrial Division – Mbale city. Her body was recovered from Toyota wish registration number UBH 060T and was handed over to a one Geoffrey Batala and taken to Kamuli district for burial.
Farouk Yadhi, who was a businessman from Somero cell, Namataala ward Industrial Division, Mbale city. His body was recovered from Nabuyonga river and handed over to the widow called Namutebi Mariam. He will be buried in Jinja city.
The fifth was Janet Diana Nekesa Diana, a resident of Bulolelo Village, Busoba sub county in Mbale District. This was was swept away by river Nabuyonga as she tried to cross it with her Subaru Forester number UBL 465A.
David Namara, a pump attendant at Oil Energy Fuel Station at Bungokho sub county. His body was handed over to Martin Wambi for burial.
Pte Sam Chemendwa, a UPDF soldier attached to 3rd Division. He was on duty traveling from Bugema army Barracks to Military police Barracks and he was swept by the floods together with the boda rider near URA checkpoint.
Police also released details of those whose bodies were were handed over without postmortem. They are were identified as Ayub Masaba Ayub and Sula Nabutanyi Sula.
“Their relatives picked the bodies after retrieval and immediately buried them in Bunapongo and Bungohoko respectively,” police said.
Police further also released details of relatives who died in a super custom number UAW 334X while going for a wedding ceremony from Kampala.
These were identified as; Edrine Ahebwa Edrine, Jennifer Nyiramutuzo, Zubair Bogere, Edward Mugumya, Richard Mulindwa Samuel Bossa, Stanley Sekatawa, Abdulkarim Bwogi, Prossy Nalubega, and Ronald Mutebi Ronald,
Police also handed over the body of Andrew Mwangale who was working with Baylor Uganda as monitoring and evaluation officer in Mbale district and Alex Masereka.
Relatedly, on August 1, police said that a one Elias Nkolo a resident Nkoma cell realized that his two children were missing after their mother had gone to hospital for antenental.
A search was mounted only to find them dead in a pit containing water near the place they were playing from. A report was made to police and investigations were enhanced. Postmortem was carried out and the bodies of Rena Nambozo and Jessica Nandi were handed over to their parents for burial.
This list was released and signed by Detective ASP Charles Wakube, the regional crime intelligence officer Elgon regional police.