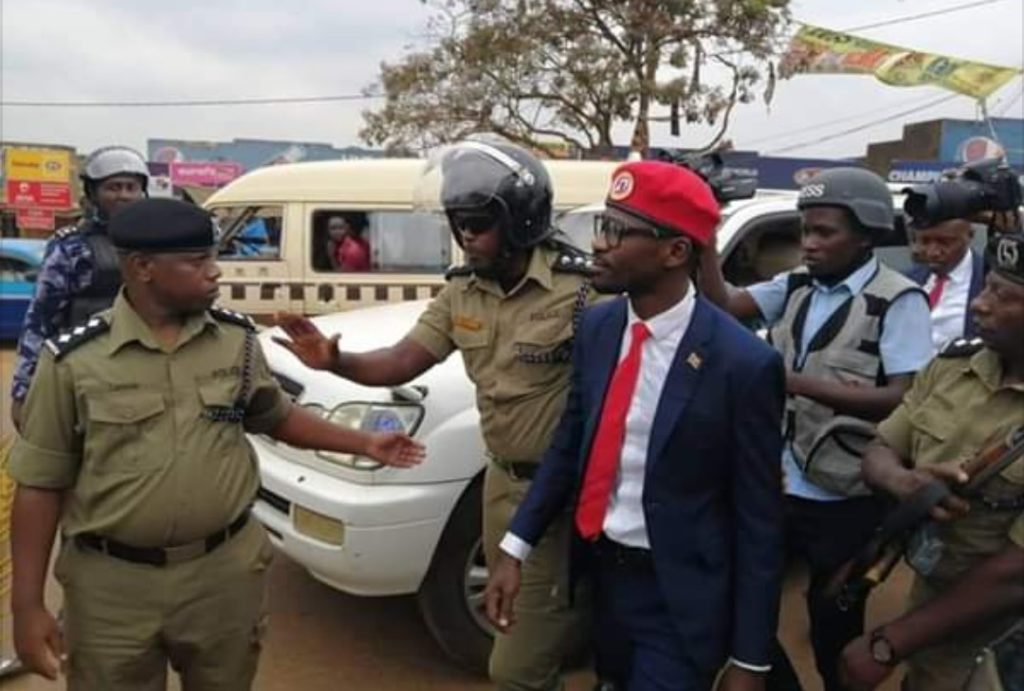 The police on  Monday morning surrounded the venue where Bobi Wine was slated to hold his first consultation meetings ahead of the 2021 presidential election.Chaos broke out when Bobi Wine reached  the venue at Our Lady of Good Counsel, at Gayaza, but was blocked by police accessing the facility.

The  move however sparked off discontent among Bobi Wine’s supporters, who started demanding that he is allowed to address them.

Soon a scuffle broke out between the police and Bobi Wine supporters, which prompted cops to fire teargas and rubber bullets to disperse the crowd.

Meanwhile, as some police officers fired teargas and bullets to disperse the crowd, others rounded up Bobi Wine, arrested and whisked him away  from the venue.

Reports say the police insist that the chosen venue, Our Lady of Good Counsel in Gayaza, was an open grounds and all political events can only hold in closed spaces. Two coordinators of Wine’s team have also been arrested.

“Police has ordered tent and music service providers off the grounds. They say the grounds are open and consultations should be in closed spaces,” journalist Mujini Raymond who is covering the event tweeted.

The MP, who also has presidential ambitions in 2021, had publicized the start of his “political consultations” which he said was to kick off today in his constituency, East Kyadondo.

Bobi Wine set off from his home for the venue told journalists: “I’m not in a position to explain the police’s illegality, I’m here to act on my legality of talking to voters to ask them what they need from an intending candidate.”

Heavy police presence remains in the area even as the MP makes his way to the venue according to reports. Police have also been seen mounting barricades on the section of the road the MP is using to the venue.