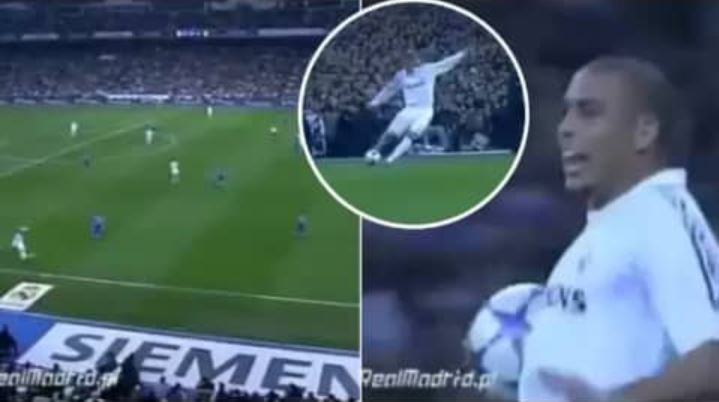 David Beckham curled in some impossible, defender-humiliating crosses – but this assist for Ronaldo Nazario might be his best ever.

Absolutely nothing looked on as Real Madrid’s No 23 took the ball on the right. Until Becks took a quick look up, then whipped in a bending, pinpoint pass that landed perfectly for Ronaldo.

Half the Real Zaragoza team were between him and his target – but it didn’t matter. Becks’ laser-guided accuracy somehow cut them all out.

All Ronaldo had to do was jog between his two markers and stab the ball home. It’s an astonishing pass.

“You were one of the best of all time in the centre, the way you touch the ball, could put the ball wherever you want, and without looking at me the ball would come.

“I should thank you for many balls you gave to me. You were amazing.”

Ronaldo’s reaction in the game itself is to quickly scoop the ball up and run back to the centre circle – which might seem strange with his goal putting Real 3-0 at the Bernabeu.

But it was an unusual situation: Zaragoza had shocked Los Blancos by winning their 2006 Copa del Rey semi-final first leg 6-1, so Real Madrid needed a massive second-leg comeback.

They got close, winning the match 4-0, but it was not enough. So home fans had to content themselves with having witnessed one of the greatest pure passes Becks ever produced.

Of course, the now 45-year-old spent his entire career threading the ball through impossible gaps, his right foot swishing past his bent-backwards standing leg in that memorable style.

But was this his most eye-catching cross? We are saying yes – unless you (or him) can tell us differently.